Much has been written of Mazda Motorsports’ development of its turnkey race car in partnership with Long Road Racing for the MX-5 Cup and other venues. Not lost in that is the fact that many will seek other competition venues for the ND MX-5 Miata, from Touring car classes to Solo competition; not to mention RallyCross, drifting and any other form of motorsports enthusiasts can find.

With that in mind, Mazda Motorsports sought input from Solo competitors to see what sorts of parts might be needed to make the car competitive in the various preparation levels offered in autocross competition, primarily Street, Street Touring and Street Prepared. Among those who provided input were Mazda Solo competitors Ron Bauer, Marc Monnar, Neal Tovsen, Rachel Kerswill, Gretchen Austin and Jason Isley.

The real development comes on the pavement, however, and Mazda Motorsports and Long Road Racing brought a couple of cars, one prepared to C Street specs and one prepared for Street Touring R, to the 43rd Tire Rack Solo Nationals Presented by Garmin Virb. With permission form SCCA, dozens of competitors tried the cars on the test and tune course at Lincoln and hundreds more explored the cars as they sat.

The result, in both classes, were competitive times and some ideas for further development of the car. The car itself, however, came with rave reviews.

“The handling of the car is awesome,” Hollis said of the stock version that he was driving. “The term I like to use is telepathic. You look where you want to go, your hands follow your eyes, and the car just does what you’re thinking. You can very easily move the weight around with the throttle and the brakes and the steering wheel.

“It’s very much like the original Miatas, both the NA and very much the NB, that’s what it feels like to me. And it puts the power down very well, too. It’s not abrupt or anything when you roll back the power. It’s not a raucous Z06 experience; it’s a much more intimate style of handling. It’s a classic roadster experience, and it’s got enough power to support that. I like it so much, I’m buying one – for a daily, at least, and whether it ends up as my autocross car, we’ll see. I like it that much.” 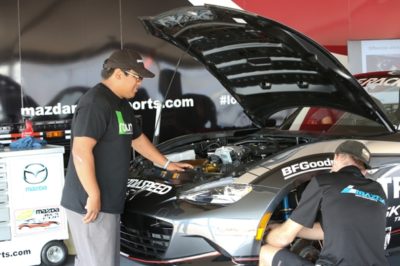 Strelnieks got to drive the further developed version, and the result was the same.

“The idea [this week] is to introduce a fabulous looking car to the Solo community that everyone can afford and do well in right off the bat, with great Mazda sponsorship and a car that can really get it done in two classes right off the bat. So I’m really excited to see that.

“This was put together pretty last minute. [Long Road Racing] has put the car together really for the MX-5 Cup, and this is the first time to autocross it. Even for STR, it’s close to where it needs to be. We’re lacking a few parts, but with development the car could be up near the top.”

Kerswill, the reigning C Street Ladies National Champion who spent a lot of time with the car on the test and tune course to fine tune the set-up, agreed – the car is everything that the MX-5 is noted for.

“The engine response is very good and features a lot more torque than previous Miatas,” Kerswill said. “The handling was very stable and rotated well through sweepers and tight corners alike. The initial setup by Long Road Racing was very good on this car.

“The car is well-balanced and handles very nicely. The throttle response is very good and the car feels light. That combination makes the car feel good when trying to push it to the limit. The car has a lot of potential. It’s really one of these vehicles that allows you to use a variety of different skills to go fast.”

Both Grassroots Motorsports and SportsCar will have in depth features on the car in upcoming issues.

Mazda Motorsports intends to use the testing and feedback to put together parts packages for the cars to run in Solo, allowing autocrossers to have a one-stop shop to put together a competitive car.

Club racers will get a peek at the new MX-5 at the Runoffs. 2016 Mazda MX-5s will be on display and used as pace cars at the SCCA National Championship Runoffs presented by Garmin VIRB on Sept. 20-28 at Daytona International Speedway.