After a race-long battle between championship contenders Ernie Francis Jr. and Corey Fergus – a theme that would permeate all three Pirelli World Challenge Touring Car Championship races at Mazda Raceway Laguna Seca – ended in contact, Adam Poland swept through in his Edge Addicts/Majestic Pet MX-5 to claim his first victory of the season. That win secured the Manufacturers Championship in the Touring Car category for Mazda and also pushed Poland into third place in the drivers standings.

“The 2015 World Challenge Touring Car Manufacturer Championship can be summed up in one word:  Customers,” said John Doonan, Director, Mazda Motorsports. “We are so proud and appreciative of all of our customer teams that have dedicated themselves to running up front, standing on the podium, and winning races for the Mazda brand. We are grateful for their investment of time, energy, and resources in racing Mazdas. This championship is a celebration of them and their efforts. Special thanks to each and every member of all the teams that brought this championship to Mazda.”

Francis Jr., fighting for the championship in his Breathless Performance/Time4Learning MX-5 had been battling for second with Fergus’s Porsche Cayman behind Vesko Kozarov’s Nissan Altima in Round 16 of the 18-race championship. Both Francis Jr. and Kozarov were given drive-through penalties for passing under a local yellow. But before they served those penalties, the face of the race changed dramatically.

On a lap 19 restart, Francis, Jr., Kozarov and Fergus all came together as they went three-wide through Turn 2. The resulting off-course maneuvers sidelined the three, allowing Poland to jump from his fourth-place spot into the lead. Francis Jr. and Fergus would end up 11th and 12th, with the result being little change in the championship that Fergus led.

Fergus won Round 17 after a tough battle with Francis Jr, and then Francis Jr. won Round 18 after getting around Fergus in the early stages. With Fergus cruising to a second-place finish, however, Francis Jr. had to settle for second in the championship.
Joey Jordan, who joined the series for the final two weekends, took all three victories in Touring Car B in the CorkSport Mazda2. In the five races he’s completed, he’s been on the podium in each and scored four victories. 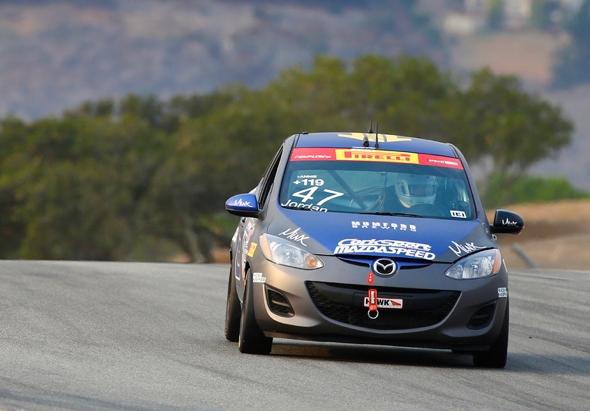