The BEHIND THE ZOOM team put together a special Track Walk video for Watkins Glen featuring Mazda racers Tom Long and Andrew Carbonell.

In many ways, Watkins Glen International looks relatively straightforward. But it can be deceiving – both in the driver’s favor and against – and tricky. It has a lot of elevation change and some very long corners, so it can be easy to learn, but tough to master. Fortunately, there are a couple of drivers in the Mazda family who have a lot of laps around the Finger Lakes region track and are more than willing to help out.

Tom Long is one of the drivers of Mazda’s SKYACTIV Prototypes in the TUDOR United SportsCar Championship. He also has a lot of time in something a bit slower, a Continental Tire SportsCar Challenge Street Tuner MX-5 run by Freedom Autosport. Andrew Carbonell is one of Freedom Autosport’s regular drivers and a Spec Miata racer as well. Between them, they know how to drive this track in a variety of machinery, and are happy to share the circuit’s intricacies and secrets in the accompanying BEHIND THE ZOOM Track Walk video.

You’ll want to bookmark this video and watch it again before your next visit, but there are several key things to keep in mind about Watkins Glen.

1. Turn 1 is critical. Your exit speed out of this turn can greatly affect your lap time, because despite the fact that the Uphill Esses snake right-left-right as the track gains elevation, most cars are flat out through there and the run from Turn 1 to the Bus Stop chicane is the longest full-throttle application on the track.

2. Most drivers will be able to carry more speed than they think due to the positive camber of most of the turns. The walls can be intimidating, so you’ll want to work up to rolling additional speed through the corners. Turns 1, 2, 5, 6, 7, 10 and 11 all have positive camber that will help hold the car. In addition, those that are uphill will also allow a driver to carry more speed than one might initially believe.

3. Watkins Glen is wide compared to most tracks; a drivers can use that to his or her advantage to maximize the radius of the turns.

4. Look further ahead than you might normally. The long duration corners and elevation mean that apexes and exits can be hard to spot. By training yourself to look a little further through the corner, you’ll have more time to adjust and keep the proper line.

Those are some of the key points for getting around Watkins Glen International quickly, but Long and Carbonell cover much more in the Track Walk video. Watch, learn and enjoy. 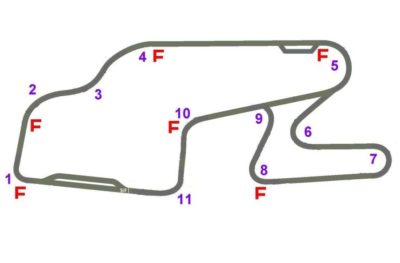