For the second straight race, Cooper Tires USF2000 Championship Powered by Mazda sophomore Jake Eidson of Pabst Racing used a first-lap pass to get around polesitter Nico Jamin and claim his fourth win of the season and the sixth of his career on the Mazda Road to Indy. Jamin, however, finished second in that race and won Sunday’s contest to pad his points lead over Eidson.

Impressive John Cummiskey Racing rookie Anthony Martin joined the championship contenders on the podium for the third time this season. It was the sixth straight race, and ninth of 11 races, that the 20-year-old from Kalgoorlie, Australia was the top freshman finisher.

After making it through the first seven turns on the 1.755 mile, 11-Turn Exhibition Place street circuit, Aaron Telitz, Nikita Lastochkin and Parker Thompson were all involved in a Turn 8 incident. Thompson, one of two Canadians in the race, came out of the fracas worse for wear when he was forced to pit road. His JDC Motorsports crew assessed and repaired the damage quickly, but Thompson finished the race one lap down in eleventh place.

Telitz, who had fallen back to fifth place after the earlier Turn 8 incident, made contact with Keyvan Andres Soori in Turn 3 on Lap 2. Soori, a 15-year-old native of Germany who qualified fifth, was forced to retire his No. 5 ArmsUp Motorsports machine. Telitz was subsequently penalized for avoidable contact and fell to eleventh place, but was able to fight his way back to claim a sixth-place finish for Cape Motorsports.

For the first 10 laps of the 26-lap event, the gap between Eidson and Jamin was consistently under half of a second, and it was only over the last 16 laps that Eidson was able to pull away to an eventual 4.1-second victory. 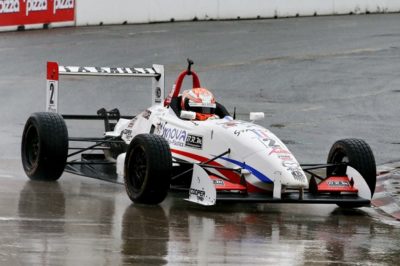 Jamin and Eidson resumed their battle in trying conditions in the second race; but this time the result was more satisfying for Jamin. It wasn’t easy for the Rouen, France native, who was able to extend his championship points lead over Eidson from nine points to 16 points. The now-five-time race winner tagged the outside wall entering Turn 1 on the final green flag lap, but was able to hold on to the lead until the yellow flag flew for the final time.

Just before the field took the 1.755-mile, 11-Turn Exhibition Place street circuit for the Allied Building Products Grand Prix of Toronto, a heavy drizzle began to fall. That precipitation left the teams scrambling to switch from slicks to the Cooper rain tires.

The first two laps of the 30-minute timed race were chaotic with numerous off-track excursions.  Max Hanratty, Luke Gabin, Lastochkin, Soori, Yufeng Luo and James Dayson all had incidents, but only the No. 5 ArmsUp Motorsports machine of the 15-year-old Soori was unable to continue.

Gabin, this year’s winner of the Skip Barber Championship Shootout MAZDASPEED scholarship, was able to recover from an early Turn 3 spin and pilot his Soul Red entry to his first Mazda Road To Indy podium, earning the Tilton Hard Charger award in the process for advancing three positions from his starting slot of sixth.

One of the more spirited battles took place between Martin and Telitz for fourth. The two drivers traded that position three times during a seven-lap span with Martin solidifying the spot in the end.

The Cooper Tires USF2000 Championship Powered by Mazda will be back on track July 31-August 2 when the closely contested championship heads to the 2.258-mile, 13-turn road course at the Mid-Ohio Sports Car Course for the lone triple-header of the season.