Florian Latorre, the reigning Cooper Tires USF2000 Championship Powered by Mazda Champion, must love Toronto’s Exhibition place street circuit because for the second-straight year he won his first race of the season at the Canadian race. The 18-year-old and his Cape Motorsports with Wayne Taylor Racing No. 10 Soul Red MazdaMotorsports.com machine held off a first-lap challenge and cruised to a 5.35-second victory over Team Pelfrey rookie Pato O’Ward in the Cooper Tires Pro Mazda Grand Prix of Toronto.

It was the first Pro Mazda podium for the impressive 16-year-old O’Ward of Monterrey, Mexico, who moved from fifth to third on the first lap and was able to get around second-place qualifier Garett Grist of Juncos Racing on Lap 14 to claim the second step on the podium.

Scoring his sixth podium of the season was 20-year-old Timothe Buret. The Juncos Racing rookie from Montpellier, France spent the majority of the race in fourth place, but was able to also get around Grist on the same lap as O’Ward.

Grist, from nearby Grimsby, Ontario brought the No. 5 Juncos Racing machine home in fifth place, the highest placed Canadian while Victor Franzoni of M1 Racing claimed his career-best finish in only his fifth Pro Mazda race after starting 11th, earning the RePlay XD Move of the Race for his pass of Grist on Lap 15.

The 18-car Pro Mazda field made it through the first two turns on the 1.755 mile, 11-Turn Exhibition Place street circuit cleanly, but unfortunately a series of incidents in the long run down Lake Shore Boulevard into Turn 3 removed six drivers from the contest and very well could have serious championship implications.

Behind the initial contact, Toronto native Dalton Kellett of Andretti Autosport made contact with Juncos Racing’s Jose Gutierrez. The pair of sophomore drivers tagged the outside wall and ended up in the Tire barriers in the Turn 3 runoff.  The third incident saw Canadian Daniel Burkett (Cape Motorsports) drive over the back of fellow Pro Mazda rookie Will Owen (Juncos Racing).

After a seven-lap caution to clean up the incident, the remaining 12 drivers were able to complete an exciting 13 green flag laps. After picking his way through the Turn 3 mess, 24 year-old Kyle Connery (JDC Motorsports) who qualified 15th, restarted the race in ninth and was able to make up three more spots to finish a season-best sixth and earn the Quarter Master Hard Charger Award. His charge through the field included a daring pass around the outside of current points leader Santiago Urrutia (Team Pelfrey) in Turn 3.

In the Expert class, for drivers over 30 years of age, it was Bobby Eberle (World Speed Motorsports) from Chicago, Ill., who beat Jay Horak (M1 Racing) to the checkered flag. 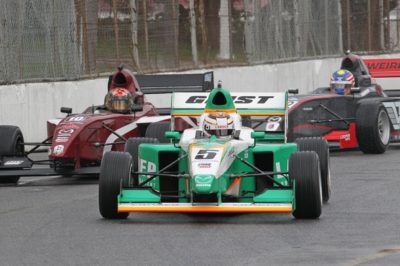 Quickly overcoming any disappointment from his finish in the Saturday race, Grist became the first Canadian to win a Verizon IndyCar Series’ ladder series event on the streets of Toronto in exactly a decade, since Antoine Bessette won a Toyota Atlantic Series race on July 10, 2005. It was the fourth career Pro Mazda Championship Presented by Cooper Tires win for the Juncos Racing sophomore, who hails from Grimsby, Ontario, a quick one hour drive down Queen Elizabeth Way.

Starting from pole for the first time this season, the 20-year-old held the lead through the first seven turns of a wet track for the Cooper Tires Pro Mazda Grand Prix of Toronto, but Saturday’s race winner Latorre was able to sneak underneath Grist in Turn 8.

On Lap 2, championship contender Alberico slapped the Turn 2 wall to bring out the first of two cautions of the day. The caution was extended to Lap 8 when Franzoni tagged the wall after spinning in yellow flag conditions.

Coming back to the green flag, race leader Latorre spun in Turn 11, handing the point back to Grist and necessitating an extension of yellow flag conditions for one more lap.

Tan and Buret were the other beneficiaries of the Latorre incident as they were able to slide into potential podium positions. Buret, who was looking for his second-straight podium, held the third spot until lap 13 when he misjudged his braking point in Turn 3 and fell to sixth position.

Buret’s misfortune opened the door for O’Ward to score his second-straight podium, and also allowed championship leader Urrutia to extend his points lead. The 18-year old from Uruguay currently holds a 30-point lead over Alberico. Jose Gutierrez of Juncos Racing rounded out the top five.

The race ended under caution on lap 17 when Alessandro Latif tangled with Latorre. Latif was later penalized 20 seconds for avoidable contact.

The Pro Mazda Championship Presented by Cooper Tires will be back on track July 17-18 when the series heads to Iowa Speedway for the second and final oval race of the season.