Sebastian and Shauna Rios are adjusting to their MX-5 after coming from all-wheel and front-wheel-drive cars, and winning.

Sebastian Rios has gone through a few cars before arriving at the Street Touring Roadster (STR) MX-5 that he and wife Shauna share in SCCA Solo competition. He started in STX with one of the all-wheel-drive, turbocharged rally cars popular in the class at the time. After blowing a few transmissions, he went with a front-wheel drive car that was a very good one for the class it was in. Then, with some rules changes and a desire for a new challenge, he felt it was time for something new. For the first time, he was campaigning a rear-wheel drive car.

“It’s been a learning experience; I think I’m finally getting the hang of it now,” he says. He’s obviously learned something – he and Shauna won their respective STR classes at the San Diego Championship Tour event in March.

Rios bought the car from fellow Southern Californian Max Hayter, who had built it up into a competitive STR car. The STR formula is pretty basic. The rules allow for alternate springs, sway bars and shocks, alternate engine tunes, exhaust and intake modifications and a few other, minor changes.

“A new modification this year is I tried new tires, the Bridgestone RE-71R. They really seemed to transform the car. A little more messing with the setup should optimize them a bit more,” he says.

After going through a few different Street Touring classes and cars, Rios is discovering he rather likes rear-wheel drive and the MX-5.

“It’s so well balanced,” he says. “It may not have the most power, but it’s nice and light. It fits me like a glove and it does what I want it to do.” 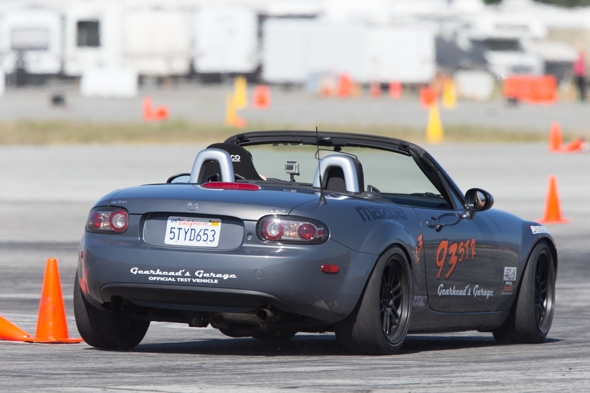