This week’s Behind the Zoom features 19-year-old Tristan Nunez, who describes the intense emotions of his first race win, and the similar feelings while taking the lead for seven laps at Mazda Raceway Laguna Seca during the TUDOR United SportsCar Championship race a few weekends ago.

The temperature inside the car was rising as I raced around the historic Mazda Raceway Laguna Seca circuit two weeks ago. This was the closest we had been all season to the pace of the leaders. I was passing lapped cars left and right and battling with cars in my class. The team radioed: “Keep pushing!” and I was quicker the next lap by three-tenths of a second. I maintained that pace until a full-course yellow came out. I pulled the No. 70 car right behind the pack, knowing the leaders must pit for fuel. My diesel-powered Mazda had plenty of fuel remaining.

I waited for the call from the team: would they tell me to stay out or pit? The radio was silent for almost a full lap as I entered Turn 10. The leaders barreled into the pit lane and I heard my strategist Marcus Shen say “Stay out, stay out!”  My car was third in line behind two lapped cars that were not in my class. The radio cues in again. “Tristan you are leading the race.” It was a feeling I can only compare to my first-ever win in a car – it happened at this very track – and the same feelings resonated throughout my body. I had achieved something I had dreamed about.

I will never forget my first Skip Barber Karting Shootout at Sebring International Raceway in 2009. Although I did not receive a scholarship, I walked away with something much greater. Spencer Pigot (now in the Mazda Road to Indy program in the Indy Lights series) was the scholarship winner and we developed a solid friendship that week. After seeing him win the award – and see him wear the MAZDASPEED Motorsports Development driver suit – I was hungry to one day wear that uniform.

I dreamed about it day and night. I was obsessed with such a simple piece of material. My friends couldn’t understand why it was so important. But it wasn’t the uniform and embroidery, it was the meaning behind it. It was about the honor to wear it and what the Mazda brand meant in my heart. I thought a lot about that suit on the long plane ride to Mazda Raceway in 2011. I had a very good feeling about the coming weekend.

It was a cold and foggy morning in Monterey, but the sun started to peek through as race time approached. I started on the outside pole as the green flag flew, and we barreled into Turn 2 – the Andretti Hairpin. I held off a challenge from the third-place driver and settled into a conservative pace, minimizing mistakes. Slowly, I started to reel-in the leader. With five laps to go, my driver coach came across the radio. “It’s time to make something happen if you want to stand on the top step of the podium.” I had never been this close to a win, but I could imagine myself standing on the top step. I pushed my comfort zone like never before.

The famed Corkscrew is where I needed a good run, and, with three laps to go, I braked deeper than ever. A strong sense of discomfort rushed through my body, So much entry speed! I turned into the daunting left hander with more oversteer than ever. I wasn’t able to see the bottom of the corner, but I trusted my instincts and gave the throttle a heavy push. The car felt like it was airborne, the engine revving to the max RPM. The steering got light and my eyes wide with fear. After what felt like a lifetime of feeling like my car was flying, the suspension compressed to its max and I could finally release my breath!

I had a huge run on the leader, and was right on his gearbox going into the last corner. I tucked into the draft, heading for the Mazda bridge on the front straight. I initiated the pass, pulling alongside as we nearly touched wheels. Nothing was going to make me back out! I stayed in the throttle until I saw the nose of his car dive under braking. He tried to beat me around the outside of Turn 2, but I drove him all the way out to the dirt.

I pulled away as I saw the white flag. I told myself “No mistakes … just bring it home … please don’t throw it off.” Exiting the final corner, I was in disbelief. I crossed the finish line with uncontrollable fist pumps high into the air. I was that much closer to finally getting to wear that suit. My eyes went right to the Mazda emblem on the scoring pylon. It caught my eye – shining like the North star in the night sky. That image stuck with me more than standing on the podium or being soaked with a bucket of ice water.

I asked myself for years, why did it stand out so much? 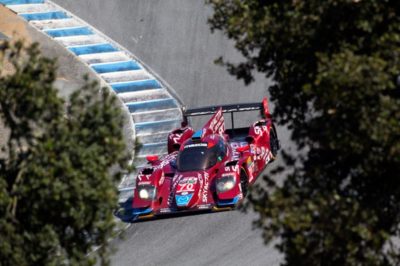 Sunday, May 3, 2015. There was no greater feeling than to be leading at Mazda Raceway with a team I dreamed about racing for since I was young. I wasn’t wearing the Mazda Motorsport development driver suit, but was very proud to be wearing the bright red factory Mazda uniform in the beautiful Soul Red SKYACTIV prototype. Leading the race in the factory car, wearing the factory Mazda suit. The following lap, under caution, I exited Turn 3 and felt the need to look up. There was the pylon I saw four years ago after my very first win. It was illuminated with the No. 70 in the first position, and right above it was that glowing Mazda emblem shining in the sky. Things don’t always turn out the way you plan. Sometimes, it turns out better.