Welcome to the second installment of BEHIND THE ZOOM, a weekly series of blogs from the drivers and the key players behind the Mazda Prototype program. Each Thursday, we will bring you a personal view of what it takes to be a part of the TUDOR United SportsCar Series with Mazda. Today, driver Jonathan Bomarito goes behind a driver’s thought process on something that only happens in sports car racing: driver changes. 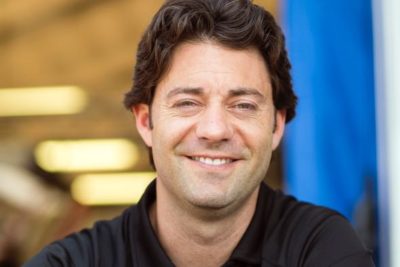 My helmet is on. The HANS device is connected. My gloves are pulled tight. Standing on pit wall next to the crew is an intense moment, waiting for the car to enter pit lane. Sometimes that can seem like forever. Once I see the car, my heart rate elevates. This is the peak of emotions. Yet, once the car stops and I jump over the wall, all nervousness goes away. I’m totally focused on the task at hand. There’s no time to think of anything else as I help my teammate Tristan Nunez out of the car and I slide into the seat with one, fluid motion. It’s my turn behind the wheel.

With the help of crew member Marko Stanic, who assists the drivers on each change, I quickly buckle my seat belts, plug in the radio cable, put my foot on the brake, clutch in, put it in first gear and wait for the words over the radio, “Go, go, go!”  I launch out of the pit box…Every step must be precise, with no room for error. If we do it right, the car could be rolling in 20 seconds or less after the doors opens and the change takes place. 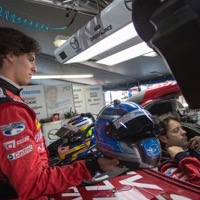 Striving to win races, a team must perfect speed not only on the track, but in the pits. While the SpeedSource team has improved the performance of the diesel Prototypes, we also need to master quick driver changes. Better than ever before, we accomplished this at the 12 Hours of Sebring. The crew dedicated so many hours to fine tuning our stops at the SpeedSource headquarters in Coral Springs, Fla. in order to have an edge when we need to pull a rabbit out of our hats in a competitive situation.

When all of the Mazda drivers arrived in Sebring, we could see that the crew upped their game on pit stops, and we knew we needed to do the same. On a hot Florida afternoon at the track, we practiced driver changes over and over, and we could see a huge improvement overall. Now we needed to put it to the test during the race.

The hard work paid off. Consistently, we accomplished some of the fastest pit stops and driver changes out of the entire field at Sebring. When the team nails a pit stop, it almost looks as though it’s in slow motion because it’s so orchestrated and precise. You can also tell because of the high fives and excitement from the team.

Success happens when preparation meets opportunity and this team is definitely ready for the opportunity.