The first steps toward development of the ND MX-5 into a global spec racecar are underway, with the first public on-track test a little over a month away. 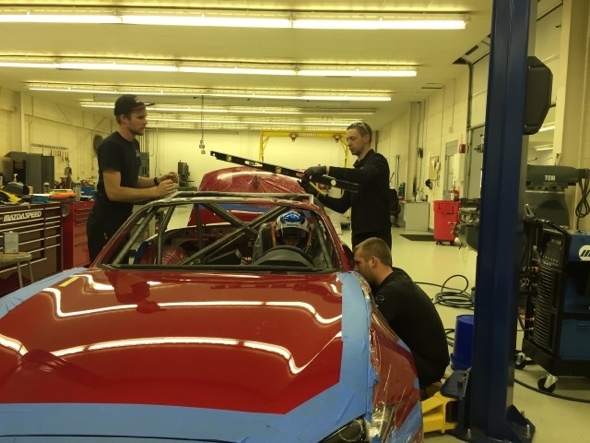 The Japanese-market 2016 MX-5 is already in production, with the U.S.-spec version beginning to roll off the line in a couple of months. But development of the next MX-5 Cup car that will be the competition vehicle for the Idemitsu Mazda MX-5 Cup Presented by BFGoodrich® Tires as well as the MX-5 Global Cup is already well underway.

The process of turning the 155hp, 2332lb. roadster into a competition car – which will be sold by Mazda – is in good hands. The development partner has cars in the shop and will be using every tool available – from good, old-fashioned let’s-see-how-this-works parts trials to advanced computer simulation – to arrive at the right package that increases the fun quotient and makes the MX-5 Cup car a rewarding, tunable racecar. 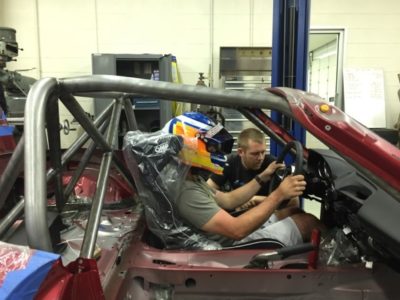 Validating the work the development partner does will be experienced racer Tom Long. Long has a venerable association with the Miata, having raced Spec Miata and winning the first MX-5 Cup when it was based on the popular class. He has raced and won in the current MX-5 in IMSA’s Continental Tire SportsCar Challenge Street Tuner class and currently pilots one of MAZDA’s SKYACTIV Prototypes in the TUDOR United SportsCar Championship. He was also the first to drive one of the early test mules of the ND MX-5 chassis, long before it was skinned with the KODO Design-influenced body that the production model will wear.

“I’m extremely honored,” he says. “To get the nod from Mazda requires a great deal of confidence in my ability and input on their behalf to help develop this new MX-5 Cup platform, which I understand is a giant task. I’m certainly not taking it lightly, and I am really excited to get started with the project. It will require a ton of dedication and focus, which I’m ready to commit.”
For Mazda Motorsports, Long was the perfect choice to develop the car.

“We wanted someone with substantial MX-5 Miata racing experience,” says John Doonan, Director of Motorsports for Mazda North American Operations. “This driver would be responsible for providing feedback to the rest of the development team when testing different performance parts, such as shock packages, brake pads, tires and more.

“There is likely nobody on the planet with more races in every platform of the MX-5 than current factory driver for the No. 07 Mazda SKYACTIV Prototype, Tom Long. Not only has Tom raced each version, but he has coached countless numbers of drivers in the car over the years. Tom literally knows each model year platform and its attributes by heart. In the summer of 2014, he went to Japan to test the all-new 2016 platform, becoming the first person outside of a Mazda employee to drive all generations of the MX-5. In and out of the car, Tom is a terrific representative of Mazda’s brand and understands what we are trying to accomplish for our customers,” Doonan continues.

The first test cars are coming together now, and Long will give the a trial version of the next MX-5 Cup car its public on-track debut at Mazda Raceway Laguna Seca during the TUDOR Championship and MX-5 Cup weekend May 1-3.

MazdaMotorsports.com will continue to follow the development of Mazda’s new global racer as it speeds toward production in July. Watch the site for regular updates in the coming months.