Exciting Finale For Pro Mazda in the pre-season Mazda Road to Indy mini-series.

Just as Team Pelfrey’s Jack Aitken predicted following the first two rounds of the Cooper Tires Winterfest at NOLA Motorsports Park last week, the outcome of the pre-season mini-series went all the way down to the wire.

The first of three scheduled races at Barber Motorsports Park was cancelled Wednesday due to inclement winter weather, but Thursday’s action could hardly have been hotter. In the end, the title was decided in favor of Aitken by virtue of the fact that he posted the fastest lap of the race in the Thursday afternoon, double-points, 17-lap finale. It was enough to ensure a one-point margin over Malaysian Weiron Tan, who gained the consolation of winning the final event of the Winterfest for Andretti Autosport.

The two series rookies shared the front row of the grid for Thursday morning’s Round Four after the grid was set by championship points following Wednesday’s qualifying wash-out. 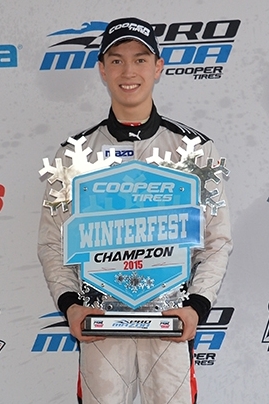 An incident on the first lap involving Nicolas Latifi (M1 Racing), who had started fourth, led to the first seven laps being run behind the Mazda Pace Car, after which Aitken laid out his intentions by jumping clear of Tan at the start. The top two positions remained unchanged for the remainder of the 15-lap race, although fastest lap was traded back and forth between Florian Latorre, Tan and Aitken before Will Owen (Juncos Racing) trumped them all on the final lap with a best of 1:22.3749, assuring him of the pole for the Thursday afternoon final race.

Latorre, winner of last year’s Cooper Tires USF2000 Championship Powered by Mazda and a MAZDASPEED scholarship to graduate into Pro Mazda this year, claimed his best result so far with third, followed by Raoul Owens (JDC MotorSports) and Dalton Kellett in a second Andretti Autosport entry.

Aitken held an 11-point advantage over Tan prior to the final race, but had plenty of work to do after lining up fourth on the grid behind Owen, Tan and Latorre.

The first attempt at a start was waved off after Tan jumped a little too soon. The next attempt was cleaner, and it was Tan who grabbed the advantage at Turn 1, despite Aitken briefly making it three-wide in the braking zone. The Englishman quickly made his way past Owen into second, while Owen’s day came to an abrupt halt later on the opening lap when he was involved in an incident at Turn 9.

Thereafter it was all about Tan and Aitken. Tan led all the way to the end, despite a couple of full-course cautions, while the outcome of the Winterfest crown swayed back and forth between the pair depending on who claimed the bonus points for fastest lap. Tan set the standard initially, only for Aitken to wrest away the advantage on Lap 3.

Gutierrez then got in on the action before Tan, and then Aitken again, reclaimed the crucial bonus points. Gutierrez again upset Aitken’s plans on Lap 8, whereupon Aitken, who was chasing Tan for all he was worth, edged the young Mexican by three tenths of a second on Lap 10. That was to prove the difference.

Tan triumphed in a green/white-checkered dash to the finish line, but Aitken’s fastest lap was enough to ensure a 167-166 margin in the final standings.

Kellett guaranteed Andretti Autosport the Team Championship with a fine run to third place in the final race ahead of rookie Tristan DeGrand, who showed impressive speed on his debut with M1 Racing and profited from several incidents to rise from eighth to fourth over the course of the final three laps.

The regular season Pro Mazda Championship Presented by Cooper Tires will commence on the streets of St. Petersburg, in conjunction with the Verizon IndyCar Series and the other Mazda Road to Indy series on March 28-29.