ALARA Racing is leveraging its winning Mazda tradition in stepping up to the challenge of the Continental Tire series. 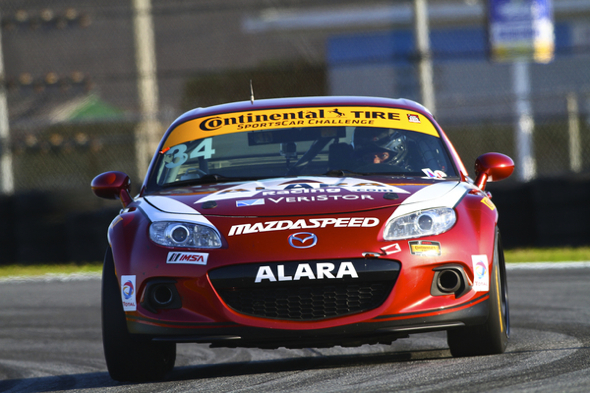 It is the natural tendency of racers to want to take that next step. Perhaps it’s moving to a faster class, or from competing on a regional level to racing for divisional and national championships. Maybe it’s stepping from club racing to pro. Whatever the step is, the drive to take it to the next level is the same that drives us to compete and go faster in the first place.

However, making the leap is not always easy.

That’s what ALARA Racing is finding as it adds a Continental Tire SportsCar Challenge Street Tuner program to its championship-winning Idemitsu Mazda MX-5 Cup Presented by BFGoodrich® Tires effort. ALARA Racing is giving its customers a progression path upward through the racing ladder, much like the ones provided by the Mazda SportsCar Racing Academy and Road to Indy programs. In fact, ALARA Racing’s 2013 MX-5 Cup Champion, Christian Szymczak, is the anchor driver for ALARA’s new Continental Tire program.

However, despite ALARA and Szymczak’s familiarity with the MX-5 platform, moving from a sprint series to an endurance series has not been a walk in the park.

“It’s a completely new game,” says ALARA Racing principal and longtime MX-5 Cup driver Ara Malkhassian. “We’re now set up with pit equipment, a full pit crew, and a much more sophisticated car in terms of drivetrain and chassis. There are a lot more regulations to absorb and you have to develop race strategy. While many of the fundamentals are similar, the elements of success in this new series are vastly more complex than we’ve developed over the last 10 years.”

ALARA Racing is fortunate to have the right technical partner in Ken Murillo, who not only orchestrated ALARA Racing’s back-to-back championships, but also Murillo Racing’s Continental  ST championship in 2014. Having the right people in place to help transition from one series to another is critical, but that is just a starting point. There has still been a lot of work to do.

“It’s really a matter of doing your homework both in terms of understanding the sporting regulations and all the details of what you can and can’t do on track, and putting that together with the technical regulations of what you can and can’t do with the car. Practicing simulated pit stops ad nauseam, poring over data, etc… they’re all the things you do in approaching a new venture you want to succeed in.  You do your homework to find out what the rules of engagement are, make a plan, and practice the heck out of it,” he says.

While a team can prepare itself for what it knows, there are lessons that they can only learn from experience. ALARA Racing learned a tough lesson at their Daytona debut when they discovered that the combination of higher engine power and endurance racing caused strain in parts that never broke in 10years of MX-5 Cup sprint races. That lesson cost the team an opportunity for a strong finish in the opening race at Daytona last month. Still, the team can take comfort in that the ALARA Racing entry was the fastest MX-5 in qualifying and showed strong pace in the race.

Those lessons are useful to anyone looking to step up to a new trial. “Make sure you achieve success at one step before you move up to another level,” Malkhassian recommends. “Racing is all about learning and you want to learn as much as you can at the lowest possible cost before you step up and start spending exponentially more amounts of money to learn the same lessons. I would suggest that drivers make sure there are no holes in their abilities before they step up to next level pro programs. The MX-5 Cup program is where we do a lot of driver development. By the time you get to Continental, it’s more about execution rather than development. You’re now adding the complexity of multiple classes running together. Situational awareness must have already been developed at a lower level. There’s no time to work on the fundamentals when you’re running in the

Continental Series. You should have all that solidly ready when you step up. Otherwise, you can have some very expensive lessons.”