The 2015 IMSA Continental Tires SportsCar Challenge season gets under way on Friday as a prelude to the Rolex 24 at Daytona TUDOR United SportsCar Championship race. Mazda is looking to improve on last year’s strong results, which saw it finish third in the Street Tuner Manufacturer’s Championship and score three victories, including two podium sweeps.

Two teams, CJ Wilson Racing and Freedom Autosport return in similar form as last year, both running  MX-5s for the season. In addition, Idemitsu Mazda MX-5 Cup Presented by BFGoodrich® Tires stalwart team Alara Racing comes in with a single car for 2013 MX-5 Cup champion Christian Szymczak. Fellow MX-5 Cup alum Devin Jones will join Szymczak for Daytona, with his partner for the rest of the season to be determined.

“We have launched our Continental Tires SportsCar Challenge effort as a natural extension of our MX-5 cup effort,” says Alara principal Ara Malkhassian. “With our technical team orchestrating not just back-to-back MX-5 cup championships, but also the 2014 CTSC championship for our sister team, Murillo racing, our confidence level is high that we will be a factor in the 2015 ST championship.”

“When we created Freedom Autosport, it was to honor the men and women serving in the armed forces, especially the U.S. Marines,” says Freedom Autosport owner Derek Whitis. “We are honored to have Liam join the team full-time in 2015. Just as important, we look forward to having additional marines served other key roles on the team.” 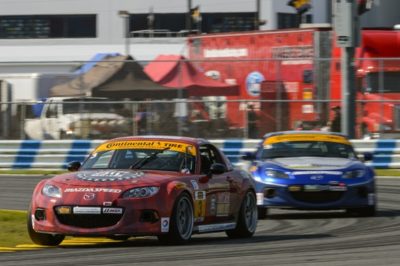 CJ Wilson Racing had several strong finishes last year, featuring on the podium in Mazda’s two sweeps at Mazda Raceway Laguna Seca and Lime Rock Park. The team will continue with a pair of MX-5s; one run by Marc Miller and Tyler McQuarrie and the other campaigned by Stevan McAleer and Chad McCumbee

The two-and-a-half hour race at Daytona International Speedway gets the green flag at 1:30 p.m. Eastern. The rest of the season schedule is below.