The battle for the 2014 Cooper Tires USF2000 Championship Powered by Mazda fittingly came down to Saturday’s USF2000 Grand Prix of Sonoma finale with the three title contenders running one-two-three at the front of the 21-car field. Friday’s winner and title contender, RC Enerson, grabbed the initiative for Team E Racing by finding a way past polesitter and points leader Florian Latorre at the start, but the 17-year-old Frenchman never allowed his rival to relax and finally forced Enerson into a mistake, then capitalized with a bold pass for the lead at Turn 7.

Once into the lead, Latorre put his head down, grabbed another bonus point by virtue of posting the fastest lap of the race, then controlled the remainder of the 15-lap outing. Latorre’s third win of the season earned him the championship title and the MAZDASPEED Driver Development Scholarship. That scholarship is worth in excess of $375,000 to graduate to the next step on the Mazda Road to Indy, the Pro Mazda Championship Presented by Cooper Tires in 2015. Latorre, from Libourne, France, became the fourth driver in as many years to win the USF2000 title for Cape Motorsports with Wayne Taylor Racing, following in the footsteps of Petri Suvanto, Matthew Brabham and Scott Hargrove.

Latorre led Enerson by just four points following the first race at the challenging 2.385-mile, 12-turn Sonoma Raceway, and Enerson knew what he had to do to wrest away the championship. He had to win. The 17-year-old from New Port Richey, Fla., pounced immediately at the start, grabbing the lead as the field accelerated through Turn 1, only for the race to be neutralized just a few seconds later due to a multi-car incident in Turn 2.

Enerson continued to lead at the restart, but he was never able to pull out any breathing space over Latorre. Finally, on Lap 11, the pressure manifested itself as Enerson locked up his brakes and slid a little wide at the downhill Turn 4. Latorre was immediately alongside, hunting for a way through.

Enerson held him off through Turn 5 and the sweeping, left-handed Turn Six, but Latorre made a good run onto the uphill straightaway leading toward Turn 7 and knew his time had come.

Diving to the inside, Latorre pulled off a clean pass for the lead and never looked back. The pass also earned Latorre the RePlay XD Move of the Race Award. Enerson had to be content with second in the race, ultimately losing the title by a nine-point margin, 310-301.

The third championship contender, Jake Eidson (Cape Motorsports with Wayne Taylor Racing), also remained in contention throughout the 15-lap race but, unlike his teammate, was unable to find a way past Enerson. 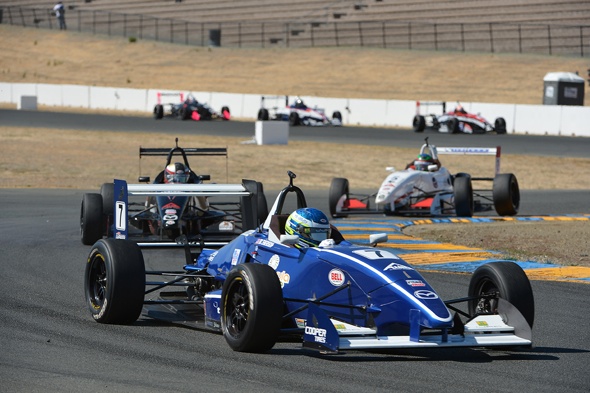