“I make a point on the whole brake release,” Carbonell says. “To me, the most important part of racing is not overslowing.”

That can be especially true on good handling cars that aren’t flush with power. Carbonell, in addition to being a driver coach, races a Spec Miata in SCCA Club Racing and a Freedom Autosport MX-5 in the IMSA Continental Tire SportsCar Challenge Street Tuner class, both cars that reward carrying momentum. But carrying the most speed through any given corner will make you faster, no matter what car you’re driving.

“I think the important thing isn’t braking at the limit, as much as it is not braking too much,” he explains. “That’s the thing that, as a racecar driver, you’ll catch yourself lap after lap thinking, ‘Oh, I could have rolled through that corner a little faster. I could have come off the brakes just a bit sooner.’ It’s a matter of being in touch and doing old school and check your miles-per-hour coming out of the corner. Just keeping an eye on what speed you’re exiting with helps you practice on your brake release. Anybody can jump on the brakes, and especially in modern cars with ABS, you can say, ‘Brake at the 3 board’ and any old Joe is going to brake at the 3 board. But how does that Joe release that brake and roll speed through that corner?”

This is the part where you want Carbonell to explain exactly how this works, how you know that right point to release the brake. Unfortunately it’s not that simple. Carbonell says it’s really hard to put into words and it’s something he can spend days coaching about. He doesn’t want to use the words “trial and error,” but he does say it’s really a feel thing and, of course, dependent on the corner and the car. 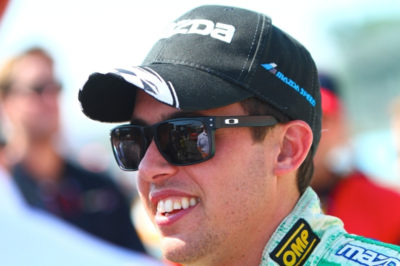 “For the MX-5, you kind of just remain on the brake, get the weight on the nose, get it turned and, once you get down to a certain speed, you know that the car is going to roll through the apex once you come off the brakes. A heavier car or one that is lighter on the nose, you want to hold it all the way to the apex because it’s not going to turn. Then you come off the brakes. It’s the timing of how long and hard you held the brakes, how you made it to the apex.”

Though it may be tough to explain, Carbonell finds the topic most interesting. Legend has it that Ettore Bugatti, in response to a customer’s complaint about the brakes on his cars, said: “I build my cars to go, not to stop.” At some point in racing history, that may have been all that mattered – the go pedal. Modern racers know how critical braking is to fast lap times and, of course, passing. Still, it may be an area that doesn’t get enough attention in motorsports theory.

“I love the whole braking aspect of racing,” says Carbonell. “It doesn’t matter what car you’re driving, it doesn’t matter how fast you’re going; once you jump on the brakes it all becomes very similar and it all turns into the same thing more or less. Now you’re focused on how much you can physically carry to the apex, how soon you can come off the brakes. The whole part of jumping on the brakes and programming yourself to come off them and roll your speed through the corner is part of racing I’m fascinated with.”