The last nine months have been full of highs and lows for Adam Poland. He won the Texas Mazda Teen Challenge Championship, which made him eligible for the Mazda Club Racer Shootout – a high. However, he missed making it to the finals of the Shootout, and any chance at the $75,000 scholarship to compete in the Mazda MX-5 Cup Presented by BFGoodrich® Tires. Yeah, that’s a low. On June 20, he scored his first Pirelli World Challenge Championships Touring Car victory, and the first TC victory for the MX-5 at Road America. It’s probably not necessary to mention whether that falls into the high or low category.

“I really didn’t expect [the wins to happen this soon],” said Poland. We knew we had a good car, and I could tell in the first race that I was doing quite a bit better than anyone else. I had the fastest lap, so it put me on pole and I knew I didn’t have any cars in front of me that I needed to worry about catching. The car hooked up great from the start, didn’t have any issues with tire spin or anything like that. It handled great, the setup was awesome and the car was just hooked up the entire race.”

Making it all the more impressive is that Poland earned the pole by setting the fast lap in the first of two races of a same-day doubleheader. That race started in the rain and was wet throughout, although a dry line was beginning to appear toward the finish. It also happened at Road America, which, with its four-mile length and long straights, was a track on which few expected the MX-5 to be particularly strong.

Even choosing the MX-5 in the first place was not an easy decision if one takes into account the history of the car in the class. The MX-5 had never been particularly competitive in Pirelli World Challenge. The series’ decision to allow the 2.5-liter MZR engine for the car was certainly a help, though, and more came on board this season, especially in the TCA class, where Ernie Francis Jr. scored a victory earlier in the season.

“We had compared World Challenge TC and MX-5 Cup before, and at first we were leaning more toward MX-5 Cup,” explains Poland. “If I were to win the Shootout, I would have gone that route. But we had to pursue something else. After comparing costs vs. media coverage and stuff like that…and I really like multi-class racing. I wanted to try something multi-class, different speeds of cars, and I wanted to try to develop the MX-5 a little further for World Challenge.”

It helped that Poland was familiar with the chassis, and found a flood-titled car for $5000. He was able to build the car up for less than the cost of an MX-5 Cup car. While he and his team – i.e., his family – put a lot of work into it, they weren’t really expecting to be standing on top of the podium in 2014.

“This season was really just to try and test the waters of World Challenge,” the recent college graduate from Mt. Vernon, Texas, says. “We didn’t come in expecting wins every single race or things like that. We were really just trying to figure out the series, how everything works, how the car is going to do. Honestly, the first two races, we were chasing quite a few issues with the car. I think that was more on my part and the fact that we had 120,000-mile parts on the car. Everything on the driveline is now new, except the driveshaft and the upper control arms on the car. Everything else is new. It’s been a great car and I’m really happy with it.”

If this was a season for figuring things out, it appears the Polands were pretty successful. 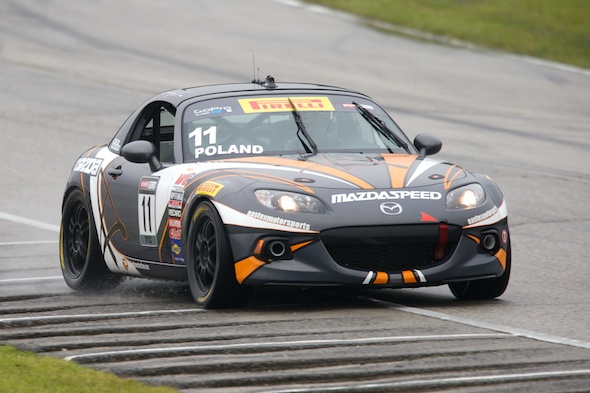