Matthew Brabham is competing in the Cooper Tires Indy Lights series thanks in large part to the scholarship money he earned from Mazda by winning the Pro Mazda Championship Presented by Cooper Tires in 2013. But there’s no question that as he moved to the top rung of the Mazda Road to Indy ladder, while he took a step up in power and grip, the current 12-year-old Indy Lights car is a step backward in terms of racing technology.

The distinctive and innovative Dallara IL-15 chassis aims to change that. Unveiled at Indianapolis Motor Speedway the day before the Cooper Tires Indy Lights Freedom 100, the car will serve as the spec chassis for the Indy Lights series beginning in 2015.

“This is an important day in the tremendous history of Indy Lights,” said Dan Andersen, owner and CEO of Andersen Promotions, which oversees each level of the Mazda Road to Indy. “Choosing Dallara as our chassis partner for the new Indy Lights car has turned out to be a great decision. They have crafted a state-of-the-art racecar with the latest technology and safety enhancements which will provide the necessary training as we develop the next crop of Verizon IndyCar Series drivers.

“It is clear to me that they can build both beauty and quality into their cars while keeping costs in line. Add in Cooper Tires, AER, PFC, Cosworth, Tilton and our other partners, and it has been a great experience seeing this car come together. We’ve ended up with a very high end ‘spec’ car which we believe will be enjoyable for our competitors to drive and very fast.”

The Dallara IL-15 has been conceived as a collaborative effort between Dallara’s headquarters in Varano de’ Melegari, near Parma, Italy, and Dallara LLC, situated just a few minutes’ walk from the Indianapolis Motor Speedway in Speedway, Ind., where all cars will be assembled. It boasts a state-of-the-art carbon composite chassis, constructed to the very latest FIA and INDYCAR safety standards, and will be powered by a 2.0-liter turbocharged AER engine producing 450hp and capable of reaching speeds of 200 mph. Additional features include a six-speed, paddle-shift transmission, a 50hp “push-to-pass” feature, drive-by-wire throttle control and advanced engine management electronics.

“The new Indy Lights car has all the latest safety and performance features that Dallara has acquired in various projects of racecars competing all over the world,” said Dallara CEO and General Manager Andrea Pontremoli. “As a whole team we are confident that we have ended up with an attractive, safe, fast and reliable piece of engineering. We want to thank Dan and his organization for the great effort he is doing to promote the series, and the opportunity for Dallara to be part of it.”

An initial shakedown test of the new car will be conducted at Varano, Italy, on July 15, after which development will continue at a variety of tracks in the United States. Indianapolis native, Indy Lights race winner and current GP2 driver Conor Daly will be responsible for the first test on U.S. soil on August 5, immediately following the Indy Lights race at the Mid-Ohio Sports Car Course. Frenchman Tristan Vautier, who won the Indy Lights championship in 2012 and has served as a third driver in the SpeedSource Mada Prototypes in the TUDOR United Sports Car Championship, also will be involved in finalizing the car’s specification, along with a couple of current Verizon IndyCar Series regulars. 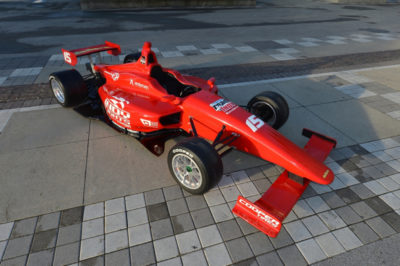