John Dean, of Sebring, Fla., scored an emotional victory in front of family, friends and supporters in Round Two of the SCCA Pro Racing Mazda MX-5 Cup Presented by BFGoodrich® Tires as part of the 62nd Annual Mobil 1 Twelve Hours of Sebring Fueled by Fresh from Florida. Thursday’s winner, Kenton Koch, of Glendora, Calif., finished second, followed by Dean Copeland, of Bowie, Md.

Dean bounced back to take the 0.542-second win over Koch, following a second-place finish in Thursday’s Round One which was decided by 0.053-second. The race was slowed to an average of 73.438 mph around the 17-turn, 2.74-mile permanent airport course due to a four-lap caution period brought out when Johan Schwartz and Zach Lee collided in Turn Three on lap six. Both drivers were okay following the incident.

This race marked Dean’s second win at the circuit in Mazda MX-5 Cup competition, however this win was comparatively more comfortable than his first win in 2012. Driving the No. 16 Projections Research/PPG MX-5, Dean exerted his control on the race from the beginning by completing the opening 12 laps in the lead. On lap 13, Copeland took over the top spot, but that was short lived as Dean recaptured the position for the remaining two laps. En route to the win, Dean also lowered the race-lap record to 2:29.059 (89.360 mph).

Driving the No. 12 Mazda Motorsports Development MX-5, Koch was in a position to repeat his win from Thursday. For all but two laps, Koch was lurking in second waiting to pounce if the opportunity arose. However, passing the determined Dean, while holding back the charging Copeland, proved to be unfeasible.

Copeland notched his first podium finish of the young season, at the controls of the No. 7 Copeland Motorsports/Sync Speed Inc. MX-5. The finish came on the heels of a strong race, in Round One, that ended early due to a broken transmission.

Finishing fifth was Andrew Charbonneau, who drove the No. 15 ALARA Racing MX-5. The finish was a marked improvement for the SCCA National Champion driver who qualified sixth. In Thursday’s race, Charbonneau also started sixth but was unable to hold the position, resulting in a 13th-place finish.

Bryan Hixon, of San Antonio, Texas, took the class win in the Skip Barber MAZDASPEED Pro Challenge, while driving his No. 63 Blackmore Partners/xBorder Foods & Wine SBMX-5. His win from the class pole puts him in the lead of the season-long championship point battle. 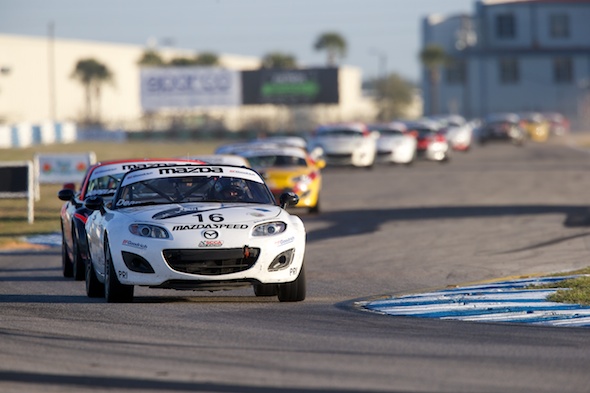