A journeyman racer with a wide range of sports car racing accomplishments, Pobst is one of the latest additions to the Freedom Autosport stable, partnering in the No. 26 MX-5 with Andrew Carbonell. It was pure serendipity that got him there.

“I feel very lucky to have found this opportunity,” Pobst explains. “I was at Daytona for the Rolex 24 test, the Roar, in early January, and the Porsche team I was driving for was pitted right next to the SpeedSource team with the two SKYACTIV Diesel Prototypes. I saw my old friend John Doonan [Director of Motorsports, Mazda North American Operations] there. Talking to him a little bit, I mentioned that Volvo was pulling their support for the K-PAX team I drove for in World Challenge. I can’t remember if I actually told him I was looking for a ride, but John said, ‘We have an opportunity I’d like to talk to you about.’ It was this drive for Freedom Autosport in the Continental Series, and I was just thrilled to have the opportunity. It’s a great team; it’s a really terrific car – well balanced, good brakes. Really, it’s a no-compromise car on the racetrack. And I have a great co-driver, Andrew Carbonell.”

When Pobst refers to his old friend Doonan, it’s worth noting that Pobst’s relationship with Mazda goes well back. Pobst drove Mazda6s for Tri-Point Engineering in World Challenge for three seasons, scoring three second-place finishes in the Touring Car championship (teammate Jeff Altenburg won the title in 2007, while Pobst also won the GT championship that year). But his favorite Mazda moment came even before that.

“I think it’s going to have to be when we won the [SCCA Club Racing] National Championship in Showroom Stock C in 1992. It was my own Miata, my own, basically, family as crew. It was a really hard-fought race. It was the first National Championship that the Miata ever won; one of many and really special,” he says.

Now he’s working to win another championship in an MX-5. While the results at Daytona may not have reflected the team’s and the car’s true potential, Pobst believes he and Carbonell have a good shot at winning the title in Street Tuner.

“At Daytona, we had a perfect race. Everything went well from our pit stop, to our driving, to the car behavior. And we were 12th…and pleased with it. The straightaways are so long; Daytona is an anomaly. We’re going to be in better shape at every other racetrack we visit, except perhaps for Kansas. At a few tracks, including Mazda Raceway Laguna Seca, we’re the favorites,” he says. In 2013, the No. 26 MX-5, with Carbonell and Rhett O’Doski at the wheel, led a Freedom Autosport one-two finish at Mazda Raceway.

“I think Andrew and I have a good shot at winning the championship or being a part of the championship for Mazda in the ST class,” Pobst continues. “That’s our goal, our mission – the manufacturers championship. Number Two is the championship for Freedom Autosport for the No. 26 car, and I think we’re going to be right in it. I know a lot of people in the paddock that are worried about us, because we’re a strong team.”

Pobst attributes much of that to the MX-5 itself: “It’s well-balanced. It’s the lightest car in the class. It’s got a high-revving, reasonably powered engine. It’s not the fastest car on the long straights, but it is the best handling car and the best stopping car. With its light weight and balanced handling, it’s easier on the tires. Our car is best on a long run. If everybody has to drive flat out for an hour-and-a-half, that’s really good for the MX-5.”

The next opportunity Pobst and Carbonell will have to show what they’ve got is March 14 during the Mobil 1 12 Hours of Sebring weekend. 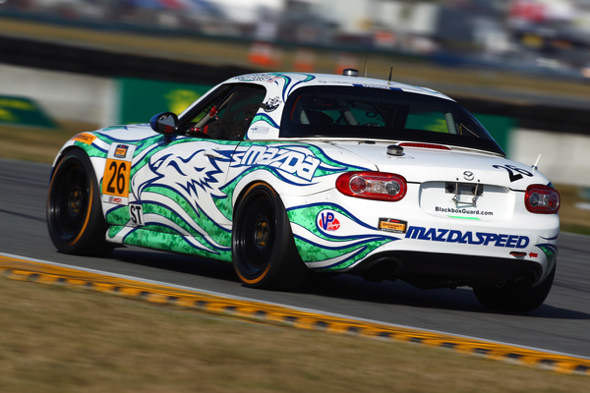