Mazda’s SKYACTIV Technology helped its all-new Clean Diesel-powered sports racing Prototype go wheel to wheel with some of the world’s fastest sports cars at Daytona International Speedway, as they tackled the grueling demands of this past weekend’s 52nd Rolex 24 at Daytona.

The two Mazda SKYACTIV Prototypes started the 2014 running of the endurance classic at 2:10 pm local time on Saturday afternoon. Collectively, over the course of the race, they covered 2,826 miles. The No. 07 car came within an hour of the finish before an oil-pump belt failure caused a loss of oil pressure. The No. 70 car covered over 1,300 miles before it was retired due to overheating caused by a clogged radiator.

Even in retirement, the Mazda Prototypes proved their value by demonstrating both the fuel efficiency and durability of their smart diesel engines on the racetrack, as both failures were related to racing accessories, not the core engine. As is always the case with its motorsports programs, Mazda will use this weekend’s racetrack learnings to further improve the performance and durability of its road cars.

While the racing SKYACTIV-D Clean Diesel engine itself was a carry-over from the championship-winning 2013 Grand-Am GX Mazda6 racing program, the greatly increased performance demands of this year’s TUDOR United SportsCar Championship Prototype Class, the top class in the series, meant that it was an entirely new program in terms of testing and development.

The car is within 10 percent of the leaders on pace and has a 35-percent advantage in range due to the efficiency of the SKYACTIV-D engine. The car also has a high “clean factor,” using a renewable synthetic diesel fuel supplied by Dynamic Fuels. Mazda Motorsports engineers will now address the radiator and belt issues that sidelined their cars this weekend, and turn their attention to dialing in even more speed as the season progresses.

“Racing is difficult, and few races match the grueling pace of the Rolex 24,” said John Doonan, Director, Mazda Motorsports. “Given the limited time we’ve had to develop the new Mazda SKYACTIV-D Clean Diesel prototype, we are very satisfied with the progress our team has achieved. That said, this is a multi-year development program and we won’t be happy until we start winning.

“The job of motorsports is to push the limits of technology,” added Doonan. “Every mile completed makes us stronger and smarter. Between our two cars, we completed the equivalent of over a dozen sprint races in the past 24 hours.”

#70
Sylvain Tremblay/Tom Long/James Hinchcliffe
Started 16th in class
Finished 14th in class
Retired due to overheating. Root cause was a clogged radiator due to track debris
Completed 369 laps for a total of 1,314 miles 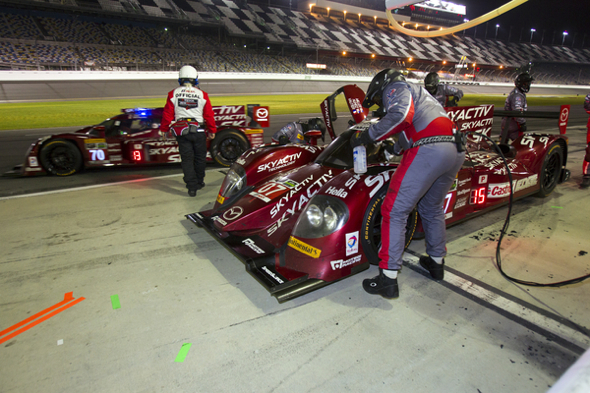