The latest Mazda Motorsports success story is 21-year-old Joey Bickers from Moorpark, Calif. After a grueling day of on- and off-track tasks, Joey edged out four other Mazda-powered club racers to win $75,000, the largest prize in all of grassroots motorsports, at the annual Mazda Club Racer Shootout.

“Wow, what a day! I am so excited to be chosen as the winner of the 2013 Mazda Club Racer Shootout!” Bickers said when he was told he had won the shootout, the richest in all of club racing. Bickers continued, “Thank you to Mazda and the NASA Teen Mazda Challenge West for the opportunity to race in the Mazda MX-5 Cup. Thank you to my family for providing me a start in racing, and to everyone else who has helped me get to this point. I can’t wait for 2014 to begin.”

Charles Espenlaub, who has been a judge for every shootout remarked, “It is truly one of the highlights of my year to be able to participate in the Mazda Club Racer Shootout. What a great process Mazda has implemented. It offers a true ladder system for racers to move up and provides a great bonding opportunity for all in the Mazda family. The talent level is always high and every year it is difficult to choose a single winner. Hopefully all the participants realize they accomplished an incredible feat just qualifying for the shootout and will take the new knowledge and friendships to the next level.”

The tally: After a full day of both driving, and classroom activities, the judges added the objective and subjective scores – discussing the merits of each driver. The judges deliberated carefully before declaring Bickers the champion.

The prize package: The $75,000 breaks out as follows:
• $50,000 for the running of his car for the season
• $10,000 in parts support
• A Mazda Motorsports driving suit and helmet
• Professional media training (Courtesy of Mazda)
• Twelve sets of BFGoodrich tires, one set per race (Courtesy of BFGoodrich® Tires)
• Twelve entry fee waivers (Courtesy of SCCA Pro Racing) 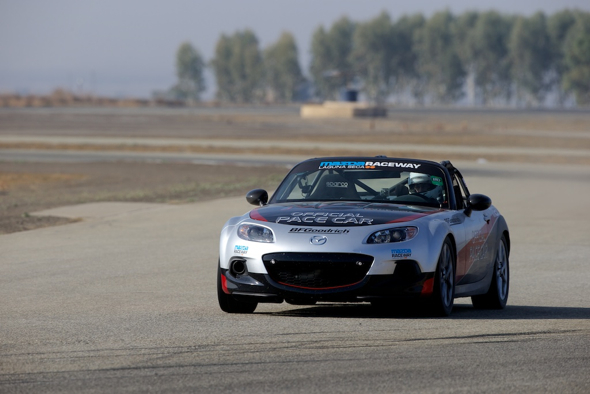