For all your Spec MX-5 Challenge Series content, check out www.SpecMX-5.com

With the announcement by all SCCA and NASA regions of their complete 2020 schedules, Spec MX-5 Challenge, LLC has released its final schedule for the 2020 race year. As previously announced, there will be 10 Marquee events at which drivers can score points toward the 2020 Spec MX-5 Challenge Championship. There will then be an 11th Championship event, with additional points, culminating in an expected $100,000 prize package.

These Marquee events are limited in number (strategically placed and timed) to ensure each gain necessary critical mass (enough cars to put on a show), and allow the significant resources each partner is contributing (e.g., Toyo Tires is offering both $ and Toyo bucks in addition to the complimentary set of tires for the first 50 Spec MX-5 builds). Recognizing some racers are able to commit to an entire season on a given coast (west or east), some desire and are able to run across the country and these bucket list tracks (i.e. the National Series), and some racers are able to make one Marquee event before the championship event (i.e. Invitational Drivers), the Spec MX-5 Challenge Series has been built to attract/maxmize racers to these events. Simply, each Marquee event brings together multiple series drivers so that car count is boosted and drivers get to experience competition with a wide range of talented drivers: 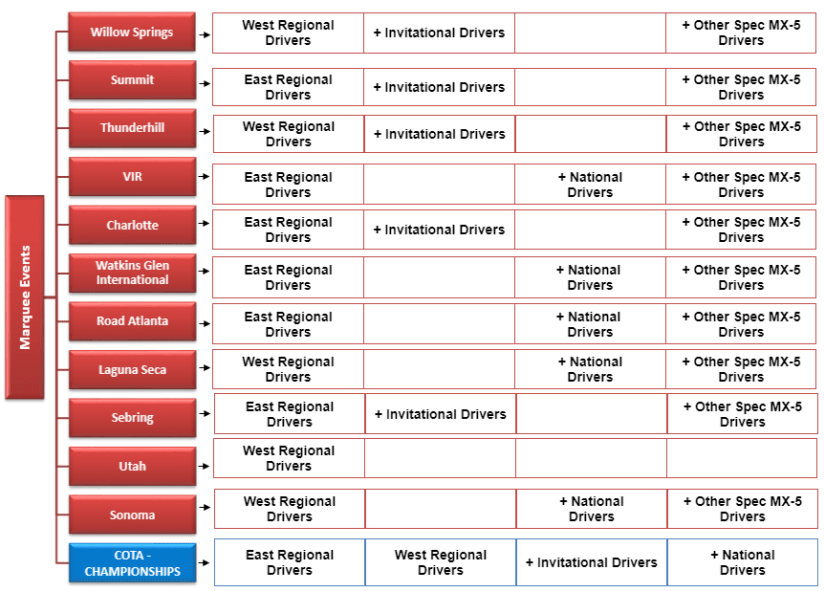 The Spec MX-5 Challenge Championship will be held in November at Circuit of The Americas, the F1 track in Austin, TX. The top drivers from East Regional, West Regional, National and Invitational competitions will bring points earned during their regular seasons and then race directly against each other at the Championship for additional points and prizes.