In fulfilling the four pillars of the Spec MX-5 design – affordability, reliability, tech-ability and fun to drive – Mazda Motorsports chose vendors and parts that would meet those requirements, making the conversion as easy as possible. In the first installment of this series, we discussed the selection of some of those components. Here, we will present the thought process behind the class, as well as talk about the actual building of a Spec MX-5.

Once the four pillars were in place, it came time to build a prototype. Mazda Motorsports already had a template to work from in the form of Spec Miata, but where Spec Miata was grown from a Showroom Stock Miata with some improvements in springs, shocks and minor engine performance upgrades, Mazda Motorsports chose a different approach with Spec MX-5.

“We took what we learned from Spec Miata and considered what’s great about the class, then asked ourselves what we could improve on,” says Josh Smith, Mazda Motorsports Specialist and the person who oversaw much of the parts selection and build of the Spec MX-5 prototype. “Instead of building a car to a ruleset or modifying existing rules, we could build a car and write rules that fit the car into that envelope.”

Mazda Motorsports had done that, in part, with the rules for the first MX-5 Cup based on the NC chassis, so it made sense to carry over some of those parts. But at the same time, Mazda Motorsports didn’t want to require sealed engines, as that series did. Furthermore, Mazda Motorsports wanted to apply various lessons learned from 10 years of racing the NC, all while constraining costs for the new spec class. On top of that was the goal of keeping the car fun and reliable, plus easy for tech inspectors to work with.

One of the lessons learned from the NC MX-5 Cup car was cooling. In a draft, temperatures could spike. That problem can’t be completely erased, Smith points out – when you cut off airflow to any radiator, it doesn’t do its job well. But cooling can be improved.

“We realized with the tight racing and some of the airflow characteristics in these cars, at the horsepower levels we’re shooting for, an oil cooler became necessary very quickly,” he says. “It’s easy to overlook this when you’re testing only a single car. When you start putting a pack of cars together and you see the reduced airflow when racing together, it became apparent that we needed a little bit of extra assistance in the cooling package.”

So with C&R Advanced Cooling Technology, Mazda Motorsports developed a radiator and oil cooler package. But it’s not just the radiator and oil cooler; the adapter plate ties everything together and actually makes the oil filter more accessible, explains Ben Thrailkill, tech and fabricator at Panic Motorsports, who assembled the prototype Spec MX-5.

“I’ve used the sandwich plates; another company makes an oil cooler that goes on top of the oil filter, but the new one Mazda Motorsports has makes it a simple piece,” says Thrailkill. “It’s a billet aluminum piece that has four bolts, and the oil filter now screws to it.” 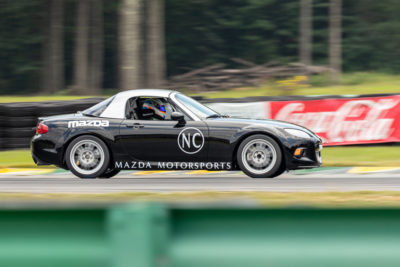 Building a Spec MX-5 is also relatively simple. Starting from a street car means cage work and all that’s associated with building a racecar from the ground up, but converting a T4 or MX-5 Cup car is something most people would be able to do on their own, short of building the engine.

“It’s a pretty simple job,” Thrailkill says. “If you’re a decent mechanic and can read a manual, you can do it. Especially if you’ve assembled your own T4 car. It’s not like you’re putting bolts in different places. It’s all the same stuff, just modified a little bit.”

The Spec MX-5 car can compete in Spec MX-5 Challenge, SCCA Super Touring Lite, NASA ST5 and in endurance racing. It is expected that where there is demand, many regions will add it as a standalone class. Most of the parts to build a Spec MX-5 are available now. Turnkey engines are expected at the end of November, and the optional 17×8 Rays wheels will be available in January.