Many of the pieces on the required parts list for the new Spec MX-5 will look familiar to current NC MX-5 racers – they are the parts that were carryovers from the NC-generation MX-5 Cup cars and were part of the optional suspension kit, air intake and exhaust for those cars running in SCCA’s Touring 4 class. Those pieces made perfect sense to include in Spec MX-5 because they were already on many of the cars that will be converted.

Others parts, meanwhile, will be new. The new single-adjustable Penske shocks sit somewhere between the complex Sachs shocks used on the NC MX-5 Cup car and the non-adjustable shocks from T4. The recent experience in choosing a new shock for Spec Miata made Penske an obvious choice.

“With the success in what they recently did with Spec Miata, we knew it was a good option,” explains Josh Smith, Mazda Motorsports Specialist. “Penske knows very well what we’re looking for in a spec series – a shock that can’t be tampered with and can withstand the rigors of racing. Penske worked really well with us and helped us dial in a package that meets not only our needs, but also the needs of amateurs and pros alike.”

In discussing the choice of the Penske shocks, Smith touches on several of the pillars on which Mazda Motorsports formed the specification for Spec MX-5: Affordable, reliable, tech-able and fun to drive. While some of the parts choices fulfill some of those requirements, others manage to touch on every aspect.

Take the Roush CNC cylinder head, for example. Of course it adds power – fun to drive – but the other elements are fulfilled as well, especially the “tech-able” part.

“Spec Miata took a Showroom Stock approach to the class and tried to turn it into a spec engine package,” Smith explains. “In doing so, the complications of trying to even the playing field where wider tolerances than are desired for racing make it challenging. In taking a factory casting and then running a CNC program on it with Roush, we are able to level the playing field without the need of complicated cylinder head and engine package rules. This combination is simple to install and easy for sanctioning bodies to enforce.” 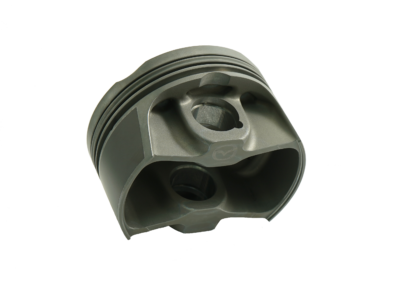 Some of the same reasons apply to the choice of Mahle forged pistons. While forged pistons present a durability advantage over cast pistons, the bigger picture is that there is now an oversized piston available – that was not an option that Mazda had in its arsenal. “This gives us a rebuild opportunity for the long run,” Smith notes. “We only had a standard bore piston; we never had an overbore opportunity. To do that, we had to go to an option other than factory, and with the price point of a forged piston vs. cast, it made a lot of sense to go the forged route.”

In a later installment, MazdaMotorsports.com will take a look at some of the other pieces of the puzzle, as well as speak with the builder of the Spec MX-5 prototype about the ease of the build.