Monterey, Calif.  (19 September 2019) — For any athlete, their rookie season can be the toughest one. And with the level of competition in the Idemitsu Mazda MX-5 Cup presented by BFGoodrich® Tires®, that can be especially true—but there is a healthy reward for success.

As the season races to the finish line this weekend at WeatherTech Raceway Laguna Seca, $75,000 in support from Mazda is on the line as Michael Carter, Gresham Wagner and Ryan Hall battle for Rookie of the Year honors.

The drivers have had to learn a new race car, new competitors, and often times new tracks as they began to understand what it takes to be a professional driver. Racing as part of the NTT IndyCar Series event weekends only adds to the experience for the young drivers as they learn to focus on performance. This season, some 16 rookies raced in the five Mazda MX-5 Cup event weekends so far, but only three have emerged with the best shot at the $75,000 prize from Mazda. 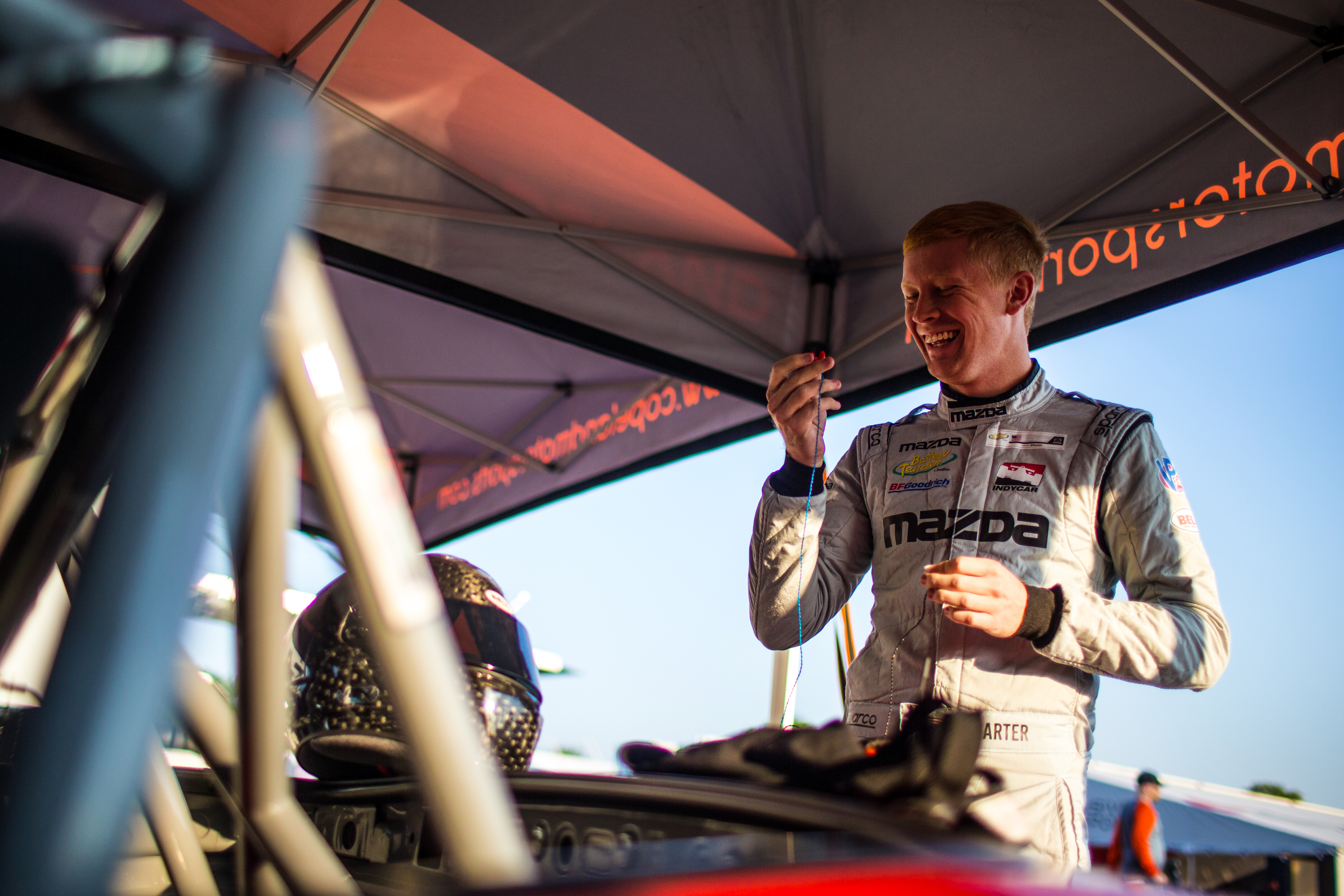 Driving the No. 08 Mazda Road to 24 car for Copeland Motorsports, Georgia-native Carter sits fifth overall in the season-long championship and holds a healthy 33-point margin over Wagner in the Rookie of the Year points battle.

Last December, Carter was selected as the winner of the 2018 Mazda Road to 24 Shootout. With the $100,000 Mazda Motorsports scholarship in hand, the rookie runner went on to score in the top-six nine out of the 10 races this season, even qualifying on pole at Barber Motorsports Park.

Finishing at Portland International Raceway with a season-high of second place, Carter is focused in on claiming a maiden victory as he looks to clinch the Rookie of the Year title.

“I am relaxed going into the weekend, I want to finish the race first in the opening round so I can clinch Rookie of the Year,” Carter said. “This season has been good so far. We’ve kept the car in one piece, which is a big plus for our budget. Getting pole at Barber was the biggest highlight of the season for me. Now we are searching for the first win and once it comes, more wins will start to naturally become a bit easier.”

Coming from Spec Miata, Carter likes the challenge that the Mazda MX-5 Cup offers particularly the 45-minute race format, as he was used to 20-25 minute races at the club level.
“I like the series because it’s hard and difficult to win,” Carter continued. “The racing is so intense. It’s a full out sprint the entire 45-minute race. Everyone is racing like it’s do or die from the start. It’s challenging, tough, close racing, and I don’t want to be anywhere else.” 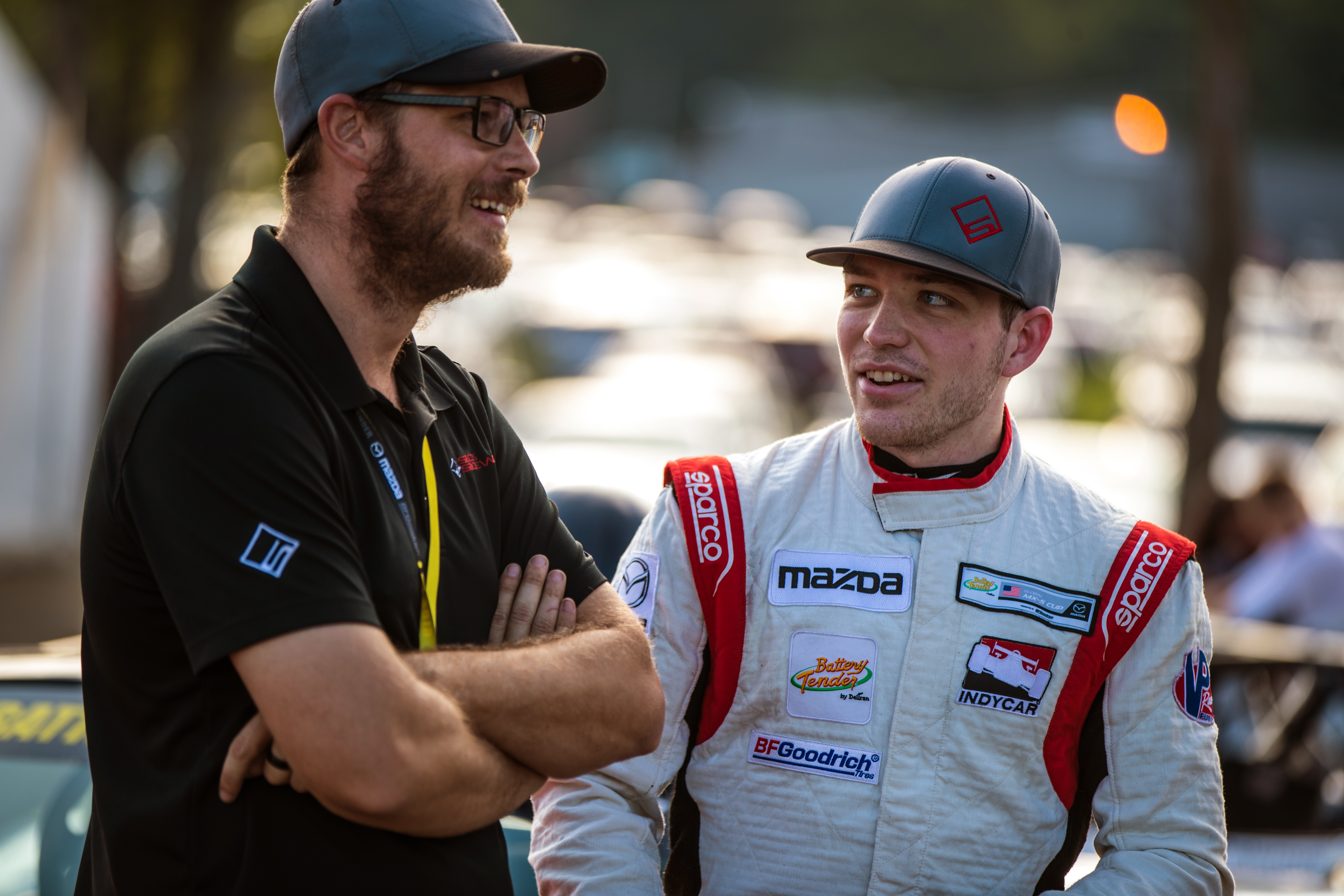 With a tough start to his season, Wagner’s pulled together a strong second half of the season performance. In his series debut at Circuit of the Americas, Wagner qualified on the front row to start the opening round in second, but early mechanical issues forced the rookie to retire early.

The Sick Sideways driver returned for the second race at COTA, taking a seventh-place finish. Everything came together at Mid-Ohio Sports Car Course for Wagner. Taking his first pole-position of his Mazda MX-5 Cup career, Wagner claimed the last step on the podium with a third-place finish in the second round. At Portland International Raceway, Wagner was the second fastest rookie behind Carter, taking a pair of fifth-place finishes. To claim the $75,000 Mazda scholarship, Wagner will have to have the perfect weekend at Laguna locking up poles in qualifying, leading the most laps,  and claiming two wins.

“Michael (Carter) has been super strong the last few rounds,” said Wagner. “Realistically, I am going to for a win or second place. We will be playing it safe, hoping for the best results possible. If there is something I can take advantage of, I’ll try!  (Michael) Carter and I have both been strong, but we’ve never battled together head to head. Coming down Laguna we are both coming up strong, so I expect both of us in the top five battling together for the win.

“I like my teammates best this season,” said Wagner about his highlights so far. “Being on a team with six or seven people, it’s been nice to have so many people to congregate with and focus on what’s important. It helps take your mind off all the anxiety. It makes the whole trip more of an experience.” 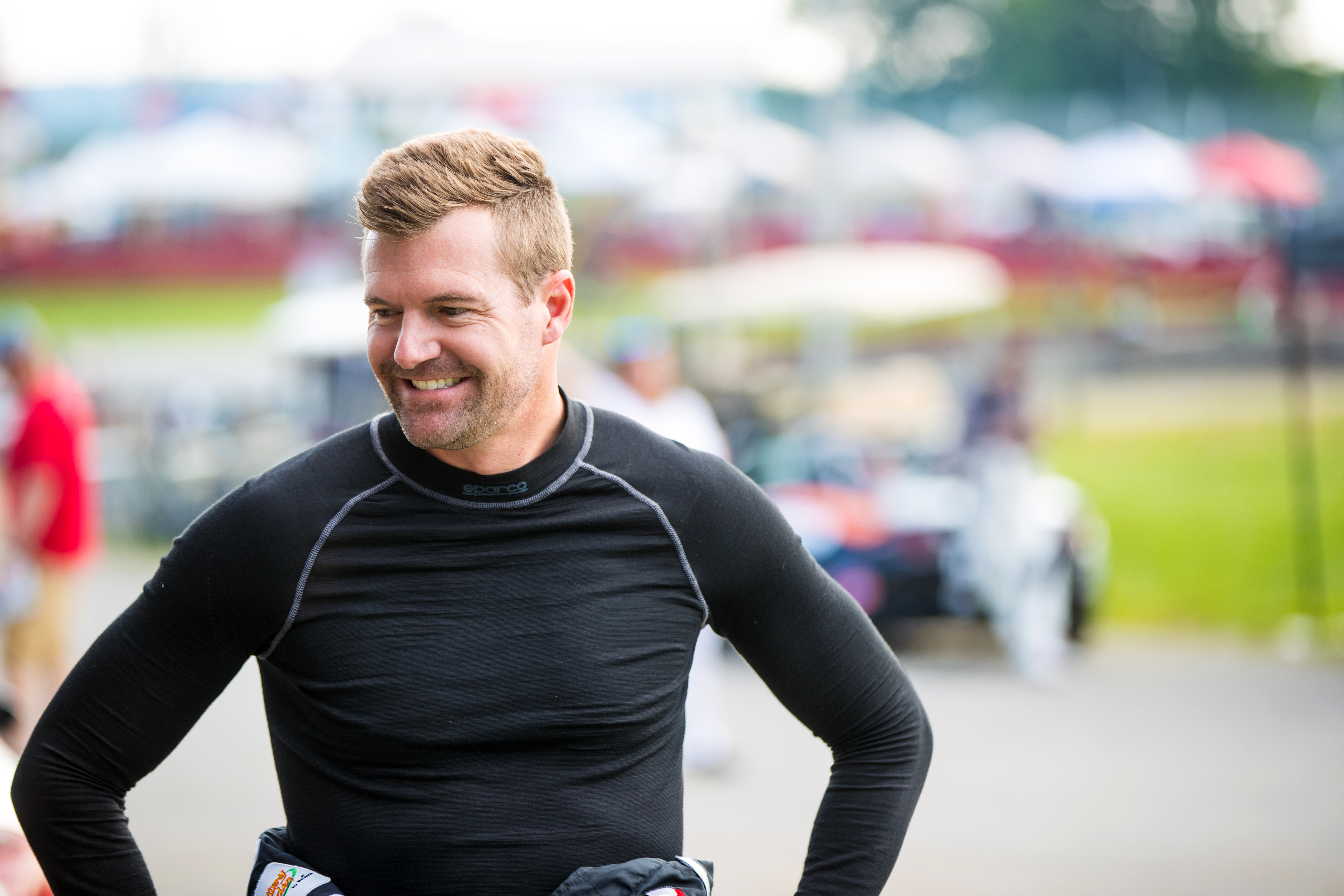 Another rookie driver in the mix during this year’s Mazda MX-5 Cup battle is Hall. Hall’s season is similar to Wagners, with a difficult start to the year before gaining ground in the second half of the season. The Portland weekend saw his results on the upswing, earning the Idemitsu Hard Charger Award after a tough Race One.

In the No. 76 Possien – Hall Motorsports car, Hall’s best performance of the season was at Mid-Ohio Sports Car course with a seventh and fourth place finish. As the only top rookie on a single-car team, Hall said that while they lack a bit of what the giant MX-5 teams like Sick Sideways and Copeland Motorsports offer, they are getting stronger each race weekend.

“It’s our first full season in MX-5,” said Hall. “As a small team we lack a bit of what the others have, like comparing data and set-ups, but we are getting stronger each race weekend, which is all we could ask for.”

Entering his rookie year, the most attractive element of the Mazda MX-5 Cup was the spec chassis and spec engine package, especially as a single-car effort.

“All cars are equal, and one team can’t outspend anyone,” said Hall. “If drivers do well in Mazda MX-5 Cup, they can do well anywhere else. From a driver’s standpoint, the championship makes drivers works on race craft and racing on IndyCar weekends is an added bonus.” 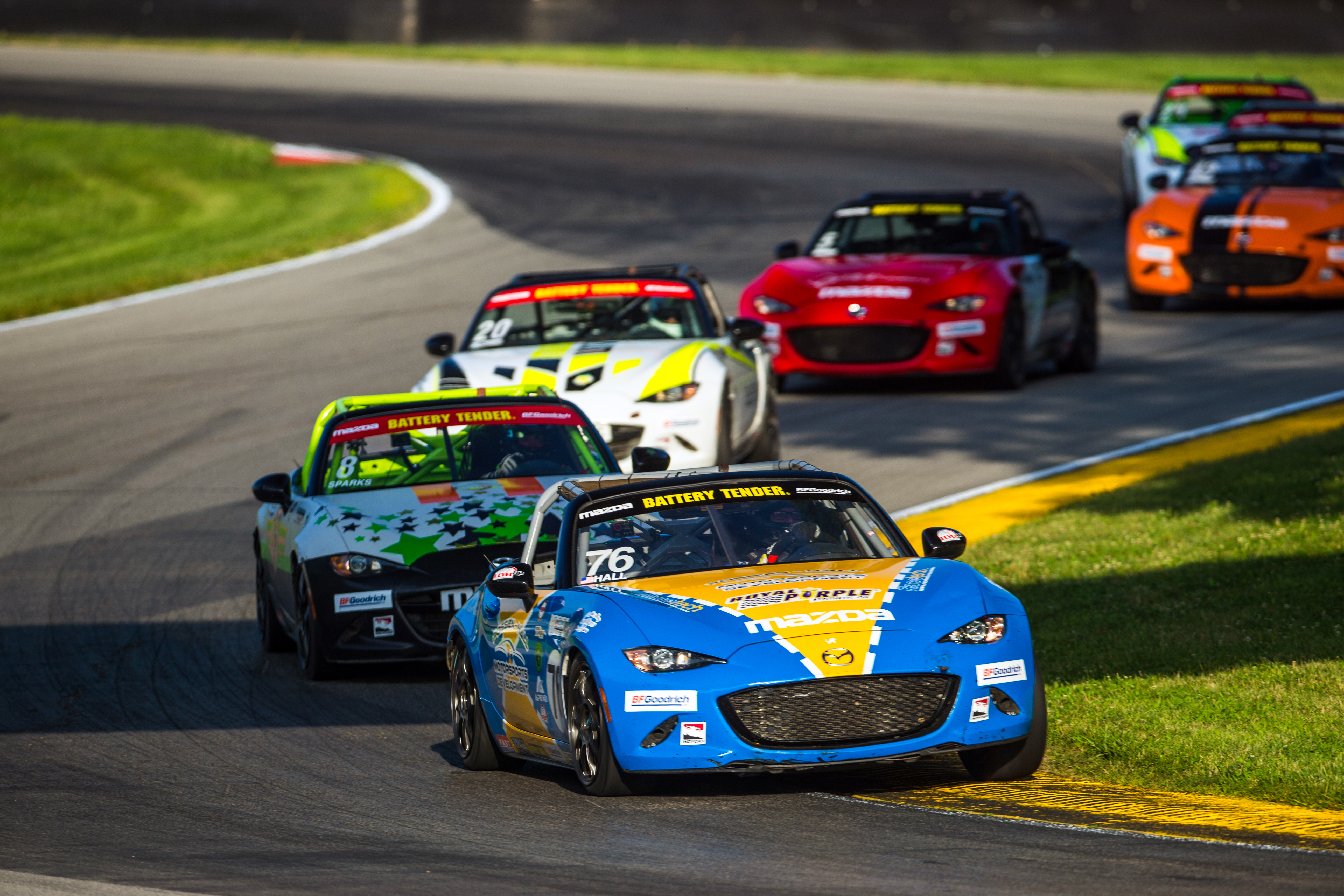 As Hall enters his rookie finale at Laguna, he is focusing on his first win of his Mazda MX-5 Cup career while raising awareness for his season-long charity efforts.

“This is our first time racing at WeatherTech Raceway,” Hall continued. “We have nothing to lose and we are in search for a podium. We will be up for the battle for the podium for a good last two race finish and bring the car home in one piece.

“Our livery supports the message Cure NF with Jack,” said Hall. “Jack Burke is a 14-year-old family friend suffering from neurofibromatosis, a disease that causes pain and small usually noncancerous tumors all over the body. He’s along with us for most of the races and we wanted to use our racing platform to spread his message.”

These three rookies, in addition to the balance of the Mazda MX-5 Cup field, will hit the challenging WeatherTech Raceway Laguna Seca for the season finale Sept. 20-21, followed by the end-of-season banquet on Sunday where the Rookie of the Year will be crowned.

The season-ending event at WeatherTech Raceway Laguna Seca will open with two practices and qualifying on Friday, September 20, with the final two races of the regular championship season set for Saturday, September 21 (11:35 a.m. and 6:00 p.m. Pacific)