Dean II wins ND1, Montgomery becomes first female to finish on podium in series history
Portland, Ore  (31 August 2019) Patient at the start but aggressive when he needed to be, Bryan Ortiz drove a flawless race to score his fourth win of the 2019 Idemitsu Mazda MX-5 Cup presented by BFGoodrich® Tires® season at Portland International Raceway on Saturday.
Ortiz (No. 4 Copeland Motorsports) crossed the line 1.9029 seconds ahead of Mazda Road to 24 Scholarship driver Michael Carter (No. 08 Copeland Motorsports) in the first race of the double-header weekend. Polesitter Robert Stout led early in the race on his way to a third-place finish, with Gresham Wagner and Robert Noaker rounding out the top five.
The 45-minute race got off to a clean start through the tricky turn one complex on the 1.98-mile circuit, and ran under green flag conditions from start to finish with the 24-car field making 239 passes through another typically competitive Mazda MX-5 Cup race. 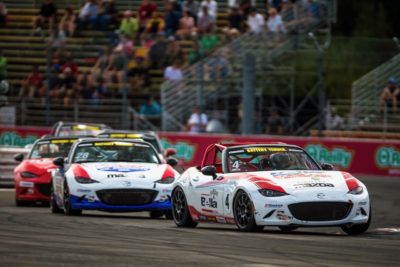 “I took a really simple approach (to Turn One) just trying to make it,” said Ortiz. “(Selin) Rollan passed me. He was there and I gave him the position. We have a 45-minute race to battle for position and I wanted to make it through. Last year I didn’t, which was partly my fault. This time I didn’t want to make a mistake.”
Selin Rollan (No. 87 Sick Sideways Racing) led the opening lap, but his day changed after a tangle with 2018 race winner Luke Oxner sent him spinning to the back of the pack. Rollan was able to muscle his way back to sixth at the checkered flag.
The dicing went all the way to the last moments of the race as a promising run for Brian Lockwood saw him off track on the final lap. Closing the day with a return to the podium was Carter, who also credited his patience for the result.
“The start of the race was fairly calm,” said Carter after claiming his career-best result and second Mazda MX-5 Cup podium. “I think I got shuffled back to sixth and then it got a little messy going into Turn One on the second or third lap. Luckily I was able to get through and that bumped me up to fourth. The car really came to me at the halfway mark and I think Gresham (Wagner) missed a shift so I was able to get by him. I was then able to race a little bit with Robert (Stout) and Bryan (Ortiz). I was just really happy to hold onto second place.”
A run to third marked another strong run from Stout, who won Race Two at Mid-Ohio and now has three podium results on the trot.
“Pole was great, and running with (Bryan) Ortiz is always fun,” said Stout. “We just didn’t have the car to beat him today. I am happy to be on the podium, and I think we know what we need to fix to come back to give a him a run for his money tomorrow. I think we can come back and win this race tomorrow.”
The pack fighting for the podium allowed Ortiz to focus forward and grow his advantage all the way to the finish. This mirrored his move in the point standings, where he grew his lead to 14 points over Stout.
“I think it’s worse when you’re in the lead with a gap without any partner, any draft,” said Ortiz. “They could catch you. I was looking back and could see they were battling until a point and then trying to catch me. You don’t want to make any mistakes. You want to keep the gap and win. It’s still nerve-wracking, but we won!” 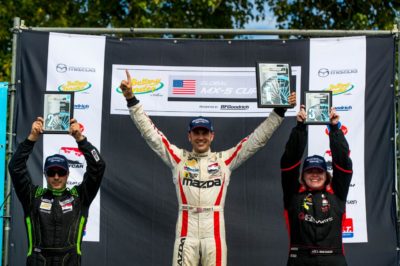 The ND1 class for the previous generation Mazda MX-5 Cup machines saw a familiar outcome as John Dean II (No. 16 Sick Sideways) scored the victory over Hernan Palermo (No. 20 -Slipstream Performance), with Sarah Montgomery (No. 20 Sick Sideways Racing) recording series history as the first female to score a podium finish in the series history with her run to third on the ND1 class podium.
“We drove really clean together and [Palermo] made a few passes on me to get back by,” said Dean. “I’m just so happy to be here with my teammate Sarah Montgomery, both supporting Harrison Contracting.”
Montgomery, who multi-tasks as a representative of Fresh Air Systems Technologies (F.A.S.T.) on the weekend, was elated with the result after emerging from a race-long battle with former series champion Nathianal Sparks.
“I have been wanting this podium all year and I have been dreaming of this moment since I first started racing in the MX-5 Cup,” said Montgomery. “For Sick Sideways to give me the car to let me do this, I am just mind-blown and I’m trying to hold back my tears. I’m the first female on the MX-5 Cup podium ever and I am just absolutely thrilled and honored to be here.”
Adding to the post-race podium was the Idemitsu Hard Charger award which featured the forward progress of Slipstream Performance driver Alex Bachura (No. 33 Slipstream Performance) as he opened the weekend by claiming a $1000 check, a Idemitsu to call his own, as well as one for his crew chief after coming home seventh at the finish.
“It was a hard-fought battle,” said Bachoura. “I went back and forth with a couple of the guys in my group. It was a personal victory for me. The first turn and the last turn I could walk away from them and they couldn’t touch me.”