The No. 55 Mazda RT24-P driven by Jonathan Bomarito and Harry Tincknell won the first race for Mazda in the Daytona Prototype international class at the Sahlens Six Hours of the Glen on June 30, with the No. 77 Mazda RT24-P right behind in second place. One week later, Oliver Jarvis and Tristan Nunez drove the No. 77 to victory with the No. 55 right behind in second place at Canadian Tire Motorsports Park.

Undefeated in two straight races at high-speed circuits, hopes are high within the team for another strong performance this weekend at Road America, a 4.0-mile circuit that is a favorite of the Mazda Team Joest drivers for it’s high-speed, high-committment nature. In the 2018 race at Road America, Bomarito and Tincknell came within one lap of winning the race in the No. 55 Mazda RT24-P with a fuel strategy gamble.

Jarvis and Nunez are now fourth in the DPi championship standings at 188 points, with Bomarito sixth at 187.

The IMSA race at Road America will be shown live on the NBC Sports App on Sunday, August 4 at 2:30 PM ET and then broadcast tape-delayed on NBC Sports at 6:00 PM ET. Qualifying will be streamed live on Saturday, August 3 at 1:25 PM ET on IMSA.tv.

QUOTES
John Doonan
Director, Mazda Motorsports
“There’s no question that Road America is my favorite circuit anywhere in the world. While I cannot remember it, I first visited the track when I was six weeks old and I have loved it ever since. As a young boy, I spent time walking through the forest to find viewing areas that did not exist, but do now! The staff at Road America has created a facility and track that is family friendly, a joy to drive and a challenge to win at. Our Mazda family brings a ton of momentum into this weekend and it would mean a great deal to score three wins in a row. Clearly, it won’t be easy given the close competition in the IMSA WeatherTech SportsCar Championship. But we plan to give it our best, as always, and see how it plays out. The Mazda RT24-P seems to love the flowing, high-speed circuits like Road America. Hopefully, Sunday will be another Mazda day!” 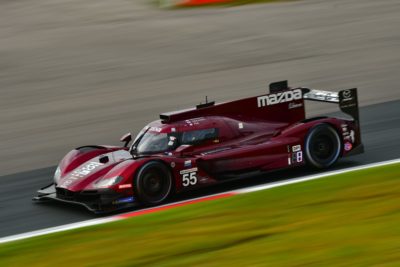 “We’re definitely excited to get back in the car this weekend. First of all, every driver loves Road America. It’s a classic, old-school track that has some really fast, really challenging corners and a really enthusiastic, great crowd. After winning two straight races, everyone at Mazda Team Joest is excited to get back to racing and to try and go for a third but we have to stay as focused as ever because the level of competition is so high. I know Harry and I want to be back on the top step of the podium on Sunday afternoon.”

Harry Tincknell
“I love all of the tracks in North America for their uniqueness, but Road America has to be the top of my list. It has a bit of everything – high-speed, low-speed, long straights and overtaking opportunities, you name It. Last year’s race was the first time I saw the place and it was tricky to begin with as you have to be highly committed to be fast, so I’m hoping with last years’ experience I hit the round running. I said In victory lane at Watkins Glen that I felt once we won one race, the next wins would come quickly, so I was happy to be proven right the net week. Two one-two finishes in a row for Mazda are what dreams are made of. We can just go for race wins in the final three races – I’m ready.”

No. 77 Mazda RT24-P
Oliver Jarvis
“Road America is one of those great classic tracks that every driver loves. It is fast and flowing and rewards drivers who are able to push to the limit in the quest to gain that extra tenth or two. For me, it is up there with the very best tracks in the world and the committed nature of the track definitely suits my style and preference. We are obviously heading to the weekend on a high after back-to-back victories. The fact that both cars managed to get a win really takes the pressure off, but having said that we will be carrying the same determination and focus into this race that we have every other race. Now that we have victories we are hungry for more!”

Tristan Nunez
“Road America is an authentic driver’s track – you need guts to get everything out of the car around this circuit. Aside from the enjoyment of the track itself, aesthetically the track is one of the most beautiful I’ve been to. And given that this is John Doonan’s home track, that makes it even more special. We come into this race with incredible momentum. We finally got that first victory at Watkins Glen, and then to go back-to-back – the best way imaginable. All of us at Mazda Team Joest feel the same. We don’t care who wins as long as a Mazda is on the top step. And to have both cars get wins made the two weekends that much more special. Moving forward, the same mentality carries over into this weekend.”