Austin Bradshaw was 2-years old when the last RX-7 was produced, but that didn’t stop him from being a lifelong fan of the RX-7 and even earlier rotary cars, such as the RX-3 and RX-2. He’s such a fan, in fact, that he recently organized a rotary race car reunion at Portland International Raceway, with plans for more in the future.

“I’ve pretty much grown up at the racetrack,” Austin says. “My father [Danny Bradshaw] started racing karts; he grew up at PIR [Portland International Raceway]. My grandfather, his dad [John Bradshaw], was a grand marshal and pace car driver in Portland for many years and a chief steward for SCCA, so my dad grew up at the racetrack similar to me. I was out at the racetrack for the first time when I was 3-months old at the Rose Cup races. It’s become my biggest passion.

“I grew up watching my dad and Gary Bockman,” he continues. “[Bockman’s GT3 RX-3] is my favorite race car I grew up watching. I was surrounded by SCCA racers and RX-7 owners. Growing up around them, Mazda RX-7s and RX-2s and 3s have become my passion.”

Austin is going into his sophomore year at Portland State University. He also has a photography business shooting racing, and he restores street RX-7s on the side. Most of the money he makes goes into his own Mazda race cars and other rotary projects.

He obtained his first RX-7 race car at age 15, a car that had been raced in Improved Touring, Pro 7 and ChumpCar. He made a few upgrades, raced a little in 2017 and ’18, plus some time trials to get more seat time, and then last November he purchased an E Production RX-2 so he would have a car that’s more competitive in SCCA U.S. Majors competition.

Given his passion for rotary race cars, it’s no wonder that he got the idea to have a race made up of all rotaries, so he sent out e-mails to gauge interest. Receiving a positive response, he began speaking with the Cascade Sports Car Club to host the race during one of the club’s events in June. He added a rotary car corral to the race event, and the entire weekend proved to be a success.

“We had 20 rotary race cars that took to the track, including Formula Mazda, E Production, GT and vintage,” Austin explains. “We had 45 drivers who had responded with interest in attending, but being the first year we weren’t expecting to get more than 20.

“We also had a rotary street car corral,” he continues. “I worked really hard with local clubs, connecting with them on social media and through e-mail to attract as many rotary owners as I could find. We had 53 Mazda rotary street cars in attendance over Saturday and Sunday, and we paddocked all of the race cars together with the car corral nearby.”

Austin found sponsors to support lunch and t-shirts for the event, and Mazda Motorsports sent swag for the participants. All in all, the first Rotary Reunion Race proved to be a hit, and now Austin is looking toward an even bigger second event. He’s even spoken with the Sportscar Vintage Racing Association about having the Rotary Reunion Race on its weekend at PIR.

“I’m going to try and hit a similar base as far as making it feel like an event, and I’m going to continue to find sponsors,” Austin says. “It kind of exploded in recent weeks; we had so much interest from a lot of different people, not necessarily all racers. There are multiple companies I talked to at the event that want to be a part of it, and I already have three or four people who want to sponsor the event. I really think it’s possible that we could get as many as 30 race cars out there next year.” 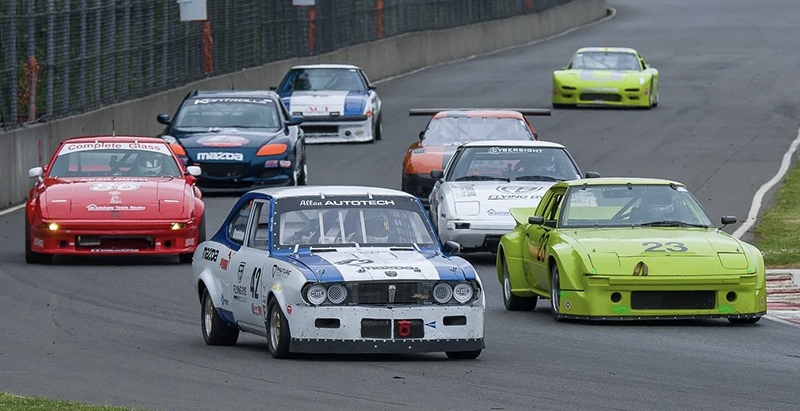