Bomarito and teammate Harry Tincknell recorded their first IMSA WeatherTech Sportscar Championship victory last weekend at the Sahlens Six Hours Of The Glen, with Oliver Jarvis and Nunez finishing in second position. The No. 55 Mazda RT24-P has continued its strong form through the practice sessions at CTMP, with Tincknell second-quickest in the first practice and Bomarito third-quickest in the third practice.

The Mobil 1 SportsCar Grand Prix will be broadcast live on Sunday, July 7 at 1:00 PM ET on NBC.

QUOTES
John Doonan
Director, Mazda Motorsports
“I’m really proud of the guys. It was a quick turnaround from Watkins Glen, and it’s been a terrific week – the momentum and the morale are high right now. But as soon as yesterday came, it was back to work. Multimatic has done an amazing job here. They are from just down the road, so this is a sort of home race for them. I know the guys wanted more in qualifying, but it was such a tight field. It will be a terrific battle tomorrow. We’ll have to keep it clean. Traffic will be insane from front to back, I think we’ll see the GT cars within five laps. The best car in traffic will win the race.” 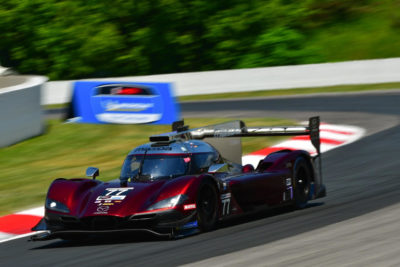 “This track is pretty dependent on track temperatures, and the temperatures went up quite a bit between practice and qualifying. But, we have a good Mazda RT24-P over a long stint and in traffic, which is everything at this track. It’s a high-speed, high-pace track. Your closing rate on traffic is really quick, and it’s a relatively short track so traffic density is much higher than Watkins Glen. It’s very demanding, both physically and mentally. You have to drive so hard and you can’t give anything away, but we are in the hunt and we’ll be really strong.”

No. 77 Mazda RT24-P
Tristan Nunez
“One of the tough things about this series is having limited practice, and we lost a bit of time when the second practice was cut short. We felt like we needed to take a big step with the setup in our No. 77 Mazda RT24-P and take the chance in qualifying. I asked the engineers to go in a certain direction, but in the end we went too far and lost some of the strength we had In practice three. But the field is really close and we have a good race car. This is a tough track, but you can use traffic to you’re advantage. It feels like a 10-hour race, with the amount of constant stress. The track is hectic but there are plenty of opportunities to make up positions so I’m excited for the race.”