The Snyders are a racing family, the youngest of which are rising stars, and it all started with a single day in a Formula Mazda

What started out as an outing at the Bob Bondurant School of High Performance Driving to get a racing license turned into a love affair that has blossomed into six Mazda or Mazda-powered race cars for a man and this three sons. And two of those sons were standing on the podium at the 2018 SCCA National Championship Runoffs.

William Snyder races a Pro Formula Mazda in Formula Atlantic. His oldest son, Wes, has raced a Spec Miata and now campaigns a Super Touring Lite MX-5. And 16-year-old twins Mark and Liam race Formula Enterprises and Formula Enterprises 2. Mark won the 2018 national championship in FE at Sonoma last October; Liam was runner-up to Flinn Lazier in FE2. That’s a lot to happen in the six years that William has been racing.

“I went to Bondurant to get my racing license,” William Snyder explains of how the love of Mazda race cars began. “On the last day, we got to drive the open-wheel cars, the Formula Mazdas. I loved the car because it’s raw, totally raw. There’s no power steering, there’s no traction control, there’s no power brakes. It’s just you, the car and God, and I love that feeling. So, I came back and bought one.”

Snyder bought the car from Moses Smith at Texas Autosports, who he also trained with. Soon after his oldest son got a Spec Miata. Then the twins started racing karts. But even long before they were racing cars, they were learning how to drive one and how to heel-and-toe in a Spec Miata. When they could get their SCCA licenses, they raced Formula Mazda and Spec Racer Ford, and that first year, 2017, the whole family raced at the Runoffs at Indianapolis Motor Speedway.

This year William and the twins plan to race at the Runoffs at VIRginia International Raceway. William intends to qualify in both FM and FA. Mark will continue in FE, and Liam in FE2. If it seems odd that they’re in different classes, when the conversion from FE to FE2 is reasonable and simple … well, it’s probably better that way.

“I keep them separated because they have a tendency to race each other instead of anybody else, and that includes taking each other out,” the elder Snyder explains. “When they got their first shifter karts in 2015, the first time out, they took each other out. They’re learning. They don’t like to compete against each other, but they are fiercely competitive. And they work hard at it.”

Oldest son Wes is in college and only races a few times per year to keep his competition license current. Mark and Liam, though, will race six to eight weekends before the Runoffs. In between, they’ll be making straight As in school – no As, no racing, Snyder says – as well as participating in scuba diving and skiing. Liam plays in a jazz band as well, and Mark is into robotics competition. Both are headed to college to study engineering – they built a rolling tank when their father gave them a welder at age 13 and have modified old karts with lawnmower wheels and paintball guns for weekend fun – but futures as race car drivers are certainly entertained.

Of course, Mazda and its scholarship may make that possibility more likely. In the meantime, the Snyders will be enjoying the support that Mazda Motorsports gives all of its racers.

“We appreciate Mazda,” says Snyder. “Mazda is a big supporter of racing, and we’re really grateful. [Mark and Liam] have won some prize money, but we love all the support we get from Mazda. They’re at the Majors races, and whenever we’ve had a problem, they’re always there to help.” 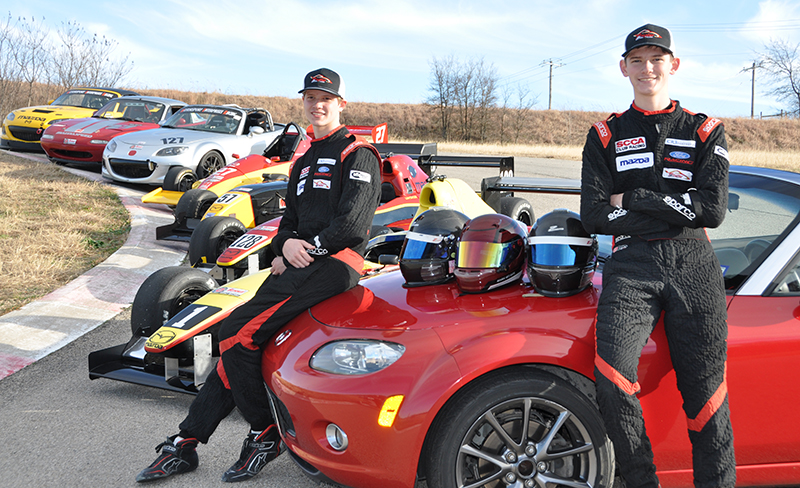