Mazda Motorsports has a new stainless steel timing wheel approved for Spec Miata by both SCCA and NASA that offers several improvements over the previous version, not the least of which are bolt slots cut on the radius, laser-etched timing marks and removing its influence on the harmonic balancer.

“The new product is of much higher quality than the older one,” explains Josh Smith, Mazda Motorsports’ specialist for technical development. “We took a blank-sheet-of-paper approach and really looked at what needed improving. The new one is laser etched. The slotted adjustment holes are all radiused correctly around the center pivot point of the timing wheel, whereas the previous ones were cut diagonally. That was causing fatigue and pressure points on the hardware.”

One of the biggest benefits could be smoothing things out a little, which could lead to longer life of some components. 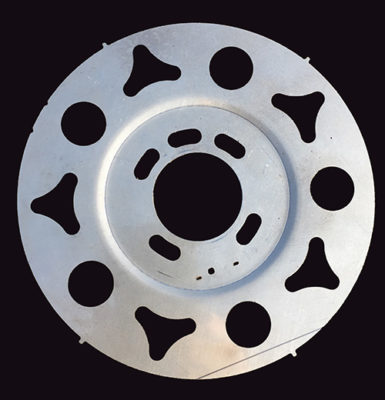 “We made it a bit thicker to handle harmonics and vibrations a little bit better at the sustained high revs Spec Miatas see. We took the approach to coin, or stamp, the piece just like the factory one so it offsets correctly to engage the crank angle sensor. In coining it and stepping it, it gets the offset off of the harmonic balancer so the harmonic balancer is actually able to work at its full potential. The flat one basically diminished the harmonic balancer’s ability to dampen engine vibrations because it took the center section and directly connected it to the outer section,” says Smith.

The laser etching allows accurate setup, and it has a notch that, when aligned with the notch on the OEM balancer, puts it at top dead center. From there, moving accurately through the 20 degrees of available adjustment should be fairly simple. The wheel has no powder coating to melt, which can cause the bolts to loosen or give false torque readings. The timing wheel comes with ARP bolts, and is also lighter than the previous version.