The 2019 SCCA Hoosier Super Tour began as it did last year, with the second Southeast Conference Majors race of the season at Sebring International Raceway. Attracting well over 350 entrants, the event enjoyed large fields across 29 classes racing on the 17-turn, 3.74-mile track.

Preston Pardus put on a show in Spec Miata driving his No. 42 Danus Utilities/East Street Racing/5x Racing Mazda Miata. Leading from pole, the 2017 National Champion was chased by Jim Drago and Elivan Goulart, both former champs themselves. Even with the talent behind him, Pardus kept the point and maintained a gap that ranged from one to three car lengths throughout the eight-lap race, which was shortened to 20 minutes due to incidents in earlier races that compressed the schedule.

“It was a pretty fun race,” Pardus said. “I had Jim and Elivan, and luckily it was a pretty clean race for me. They started racing behind me for second a few laps into it, and I was able to make a little gap there at the end.”

Though Goulart tried to work with Drago to challenge Pardus, it was clear with a lap to go that they had nothing for the hot shoe. Instead, Goulart peeled off going into Sebring’s tight final corner and drove to the inside. That proved the right move, as Goulart was able to sneak into second place at the stripe by just 0.153sec.

Sunday’s Spec Miata contest saw a nasty incident exiting the final turn that only allowed a couple of green-flag laps because the tire wall had to be rebuilt. Fortunately, that tire wall did its job, and no one was injured. Pardus repeated his win, his third in four races so far.

Keith Grant’s No. 40 Mazda/Hoosier/Polestar Swift 016/Mazda was the fastest Formula Atlantic in the field, and after winning caution-filled race on Saturday, he was back for more on Sunday. His biggest challenge came in surviving attacks by Dario Cangialosi’s K-Hill prepared Swift both at the start and following a seventh lap restart. Hounded on the opening lap of both stanzas, Grant was able to break clear in clean air and sweep the weekend with overall and class wins – finishing 3.706sec in front of his brother, David Grant, on Sunday.

Just a bit further back in the same group, Formula Enterprises 2 driver Scott Rettich, who took the Saturday victory, and Liam Snyder were putting on a great show. Rettich led in the No. 17 Alliance Auto Sport/Red Line Oil machine until the restart, when Snyder’s Mazda-powered car wheeled around Rettich. The positions were reversed on lap 10, but only briefly due to Rettich spinning in Turn 1 trying to overtake slower traffic – that left Rettich too far behind Snyder, who scored the victory. Liam’s brother, Mark, joined him as a winner on Sunday, taking Formula Enterprises. James Libecco won FE on Saturday.

The next Hoosier Super Tour will be at Circuit of the Americas on Feb. 8-10. The Southeast Conference has its next Majors race on March 15-17 at Michelin Raceway Road Atlanta. 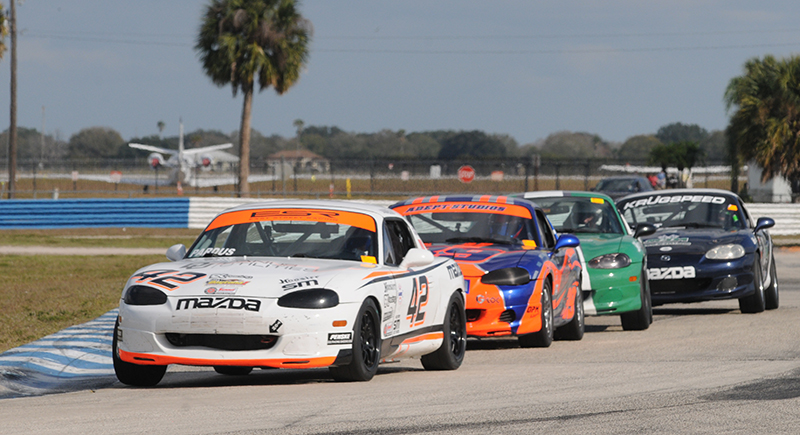