With a big push from Mazda, but open to competitors in all makes, the inaugural GT3 Challenge presented by MPI race took place during the SCCA’s American Road Race of Champions (ARRC) at Road Atlanta. The race attracted a field that included some of the top GT3 competitors east of the Mississippi to take advantage of increased competition, incentivized by increased contingency, the opportunity to win numerous prizes, and subsidized entry fees. 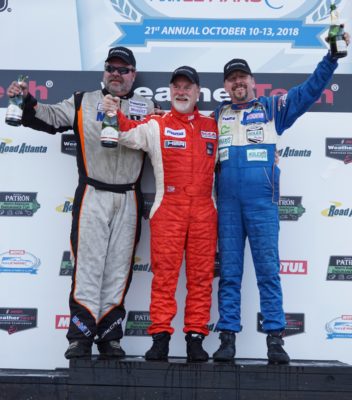 Multiple SCCA GT3 National Champions competed in the GT3 Challenge presented by MPI. When the dust settled, it was Jeff Dernehl in his third-generation RX-7 taking both the ARRC race on Saturday and the GT3 Challenge race on Sunday, which brought out two more competitors than Saturday’s event. Stacy Wilson finished second in his second-generation RX-7 and Richard Grupp was third in an RX-3. Courtesy of MPI, whose interest in the GT3 Challenge primarily stems from wanting to give back to the racing community, each of the podium winners for Sunday’s race were awarded a special MPI trophy.

But the podium finishers were not the only winners. John Mills, who purchased a GT3 car specifically for the GT3 Challenge, came away with a set of Hoosier tires. AiM Sports bolstered the support to the club racers by providing product to give away as well; Sam Moore now has a SmartyCam and Stacy Wilson has an AiM Solo 2 DL Mazda contingency awards, and the specially-made trophy from MPI.

Tom Long has driven everything from Spec Miata to Mazda’s RT-24P prototype, and was on hand to coach a GT3 competitor. He came away impressed with the cars and the racing.

“The SCCA GT3 class platform is absolutely terrific,” Long says. “The cars are exhilarating to drive – fast paced, lightweight, balanced and make all the right sounds. Certainly all the elements to a real race car! With all the adjustability the rules have to offer, the class is perfect for someone who enjoys playing with cars and tinkering to go faster. There’s plenty of adjustment for fine tuning, and the driving experience makes it all the more rewarding.

“While I was coaching in the paddock, the sense of camaraderie is unlike most other classes, where the willingness to help out a fellow competitor is unparalleled. Truly a cohesive group of racers,” he adds.

It wasn’t just Mazdas competing, though. The grid included a Honda, a Ford and a pair of Volvos. Overall, the event was a great start to a series where the main focus is building interest in the GT3 class.

“The excitement that is building from within the racing community is more than we hoped for,” says David Cook, business development manager for Mazda Motorsports. “When top racers such as Rob Warkocki from Illinois, Stacy Wilson from Tennessee, and John Mills from Ohio make the journey to Road Atlanta, you know you’ve got something good. John even purchased a GT3 car just to compete at this event. Paul Young, Sam Moore and Joe Kristensen also joined in. Richard Grupp came out and demonstrated he can wheel his beautiful RX-3. Jeff Dernehl, though, brought the total package. When you tether his talent behind the wheel, the prep of his car with help from his crew chief Barry, and his experience at the track, he put on a special show. GT3 Challenge is only going to build from here.”