MADISON, Ill. (August 27, 2018) – 15 countries are represented across the Mazda Road to Indy and with each driver representing their homeland comes a great deal of national pride. From families traveling around the world to national news outlets around the globe following their path, the presence of international drivers is what makes the Mazda Road to Indy so competitive and diverse.

For Hoofddorp, Netherland’s own, Rinus VeeKay, competing in the Pro Mazda Championship Presented by Cooper Tires is already positioning the 17-year-old for future success in the Verizon IndyCar Series.

The young driver has put together an impressive stat sheet in just his second year on the Mazda Road to Indy with 20 podium finishes and 10 wins as the series heads to the final rounds of the 2018 season at Portland International Raceway. The Pro Mazda Championship points leader is on the brink of winning the Mazda scholarship to compete in Indy Lights next season.

The young-Dutchman began karting at 8-years-old and impressed early on. In 2011, he garnered World Formula Honors, won the Rotax Minimax in 2012 and in 2013 won the Rotax Max Junior and Rookie Junior overall championships. In 2015, he transitioned to senior karts at just 14 years of age. He went on to become the runner-up in both the European and American Rotax Max Senior Championships.

“When we collectively launched the new USF-17 car in 2016 at the Indianapolis Motor Speedway, Rinus was the first driver to announce he was going to drive in the USF2000 Championship,” said Kyle Kimball, motorsports operations manager at Mazda. “We saw the battle he and Oliver Askew had in USF2000 last year and we knew that Rinus VeeKay was here to stay in the United States and was going to ascend to the Verizon IndyCar Series.”

“To be in this position as the championship leader means a lot to me and my family,” said VeeKay. “To be the only Dutch driver on the Mazda Road To Indy feels amazing to be as successful as I am now. I hope I can inspire other young Dutch drivers to move to the United States and be successful here.”

“We are more like best friends than anything else, not father and son. I enjoy every moment with him and he’s the most supportive and fanatic dad you can have. My Mom, Evelien, and my trainer, Raun Grobben, are also supporting me and helping me succeed and hopefully become a champion.”

The 2018 Mazda Road to Indy finale begins on Friday from Portland, Oregon with practice sessions for all three series. Saturday and Sunday will play host to five races, with Indy Lights crowning their champion on Sunday, September 2. You can watch the series finales on the @RoadToIndy app and on RoadtoIndy.TV. 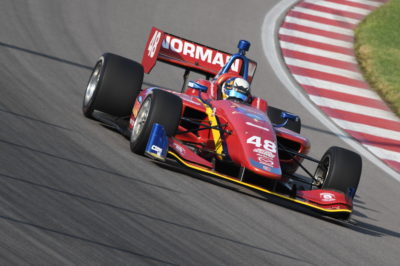 Indy Lights championship points leader Patricio O’Ward and teammate Colton Herta continued their duel this weekend at Gateway Motorsports Park. Herta claimed the pole position for the 75-lap race and held the lead early on in the race but the man on the move was Santi Urrutia. The Uruguayan driver went from seventh to third on the opening lap. On-track battles between the Belardi Auto Racing teammates Urrutia and Aaron Telitz would set the stage for a thrilling finish between the front runners, Herta and Andretti teammate Ryan Norman. The two went wheel-to-wheel for several laps, not giving an inch. On Lap 71, Norman made his move on the inside of Turn 3 and made the move for the lead. Norman would go on to capture his first career Indy Lights victory in dramatic fashion by 0.2055 of a second over Herta. O’Ward would finish third. O’Ward’s lead is now down to 35 points over Herta as they head to the final race weekend at Portland International Raceway.

17-year-old Rinus VeeKay seized the weekend and grew his championship lead to 47 points after dominating the 55-lap Mazda St. Louis Pro Mazda Oval Challenge. VeeKay lead both practice sessions and qualified second behind Harrison Scott. The Dutchman would take the lead on the first lap with a pass around the outside of Scott in Turn 1. Juncos Racing teammate Robert Megennis would fight from fourth to second on the first lap to set-up a Juncos Racing one-two finish. Championship contender Parker Thompson missed qualifying due to a mechanical issue but would charge from 11th to finish an impressive sixth place. VeeKay’s victory is his seventh of the season and his fifth in a row as the championship prepares for a double-header race weekend at Portland International Raceway for the final event of the season.