IRVINE, Calif. (August 24, 2018) – Two young drivers are closing in on Indy Lights and Pro Mazda championships as the series take to their third and final oval race of the season this weekend at Gateway Motorsports Park in Madison, Illinois.

Saturday’s Mazda St. Louis Indy Lights Oval Challenge will be streamed live on Indycar.com, and broadcast on NBC Sports at 12:00 AM EDT on Monday, August 27.

Patricio O’Ward has claimed the last four of five Indy Lights races, including a sweep of the previous doubleheader at the Mid-Ohio Sports Car Course, which has helped him to build a 32-point lead over title rival Colton Herta. The two drivers have split the oval victories this season, with Herta winning at Indianapolis and O’Ward winning at Iowa. Looking for his second win of the championship is Santi Urrutia, who is third in the title. 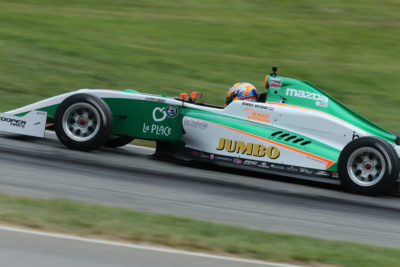 With four consecutive victories of his own, Reenus VeeKay has taken command of the Pro Mazda championship. Holding a 25-point lead over Parker Thompson, the race at Gateway – which offers points-and-a-half – could all but clinch the championship for VeeKay or catapult Thompson back into the championship with two races remaining. 68 points behind and third in the championship is Carlos Cunha.