IRVINE, Calif. (June 28, 2018) – Mazda Team Joest will need to beat the Prototype competition in the IMSA WeatherTech Sportscar Championship – and near triple-digit temperatures – for six hours this weekend at the Sahlen’s Six Hours of the Glen.

In complete contrast to the city streets and concrete walls of the previous IMSA race on Belle Isle in Detroit, Watkins Glen International is a permanent road circuit featuring high-speed corners and rolling terrain. Located near Seneca Lake in upstate New York, the teams competing in this weekend’s Sahlen’s Six Hours of the Glen will also be facing ambient temperatures approaching 100 degrees on race day. That high heat will add to the challenge that the six Mazda Team Joest drivers will face, as it will add another level of stress to the drivers on a circuit that is already mentally and physically demanding.

Mazda captured a podium finish in the Mazda RT24-P at last season’s Six Hours of The Glen with drivers Jonathan Bomarito, Spencer Pigot and Tristan Nunez. Bomarito and Pigot will team again, this time with Harry Tincknell, in the No. 55 Mazda RT24-P while Nunez will share the No. 77 Castrol/ModSpace Mazda RT24-P with Oliver Jarvis and Rene Rast. Jarvis, Rast and Tincknell will be making their first appearance at the 3.4-mile, 11-turn circuit that is a favorite of the drivers in the IMSA WeatherTech Sportscar Championship.

Jarvis and Nunez are seeking their second podium finish of the season, following their third-place finish at Mid-Ohio.

John Doonan, Director, Mazda Motorsports
“We head back to the Six Hours at the Glen with confidence thinking about the podium finish we scored there in 2017 and hoping that, with all the advancements Multimatic has made on the chassis package, the Mazda RT24-P should be even better and we will have a good shot at a strong result. It’s going to be far from easy this weekend, however. The 2018 championship has proven to be the most competitive sports car racing on the planet with top teams, top cars and top drivers. And when you add to all of that some extreme summer heat in the northeast, we are all going to be put to the test. As always, we look forward to the challenge and we will be ready to put up a strong fight.”

No. 55 Mazda RT24-P
Jonathan Bomarito
“Watkins Glen is one of the best tracks in the country. With this being a six-hour race, it’s longer than our normal races but it’s still driven flat out and that makes this race really difficult. And, the weather looks to be super-hot which will add more stress on the drivers and the crew. I’m eager to get back on track and to fight for another podium on Sunday.”

Spencer Pigot
“Watkins Glen has quickly become one of my favorite tracks, so I’m excited to be heading back this weekend with Mazda Team Joest. We were on the podium there last year, so hopefully we can repeat that success. We’ve been very competitive this year so I’m confident we’ll be fighting at the front with the Mazda RT24-P.”

Harry Tincknell
“I’m really looking forward to taking on the challenge of Watkins Glen this weekend. Everyone around the paddock has told me that it is the best circuit of the season – ultra high grip with lots of fast turns so I can’t wait to get on track. After two street circuits in a row for me, I’m looking forward to seeing how the ever-improving Mazda RT24-P fares on a conventional road course. We’re back to a proper endurance race here with six hours of competition and I can’t wait to team up with Jonathan and Spencer again.” 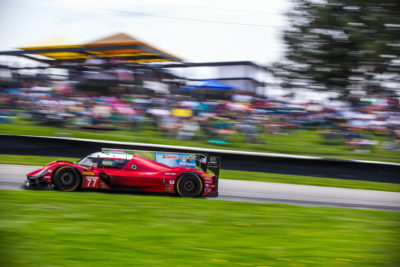 “It’s exciting to be coming back to the Glen. Jonathan, Spencer and myself had a successful race last year with a third-place finish in the Mazda RT24-P. This year, who knows what could happen. It’s going to be a hot one based off of what I’ve seen in the forecast, and that should play a big role in the endurance of the cars and the drivers across the field. The pace will be faster than last year and it will be a good show for the fans.”

Oliver Jarvis
“It’s good to have the whole team back together for Watkins Glen with Rene once again joining us due to it being a six-hour race. It looks like it’s going to be an extremely hot weekend so it will be a tough race both physically for the driver and mechanically for the car. It’s again a new track for myself, but I have driven it on the Multimatic simulator and can already tell what an incredible track it is. I really can’t wait to turn my first laps in the Mazda RT24-P on Friday morning! After once again showing good pace in Detroit, our aim here is clear – to try and achieve another podium and ultimately be on the top step after six hours.”

Rene Rast
“I am very much looking forward to racing at Watkins Glen as I have never been there, but I’ve done a lot of races on my simulator over the years. It’s really one of the nicest tracks with lots of high-sped corners which are very challenging, especially when the ambient temperatures will be high. For the driver, it will be physically exhausting and for many cars reliability could be an issue. Hopefully, the race ends with us standing on the top of the podium.”