ELKHART LAKE, Wisc. (June 25, 2018) – As the Mazda Road to Indy made its annual pilgrimage to Elkhart Lake, Wisconsin’s Road America circuit, most of the teams loaded their transporters earlier this week with a long drive ahead of them. However, for Cooper Tires USF2000 Championship Powered by Mazda team ArmsUp Motorsports, it’s a 14-minute drive on the familiar State Road 23 and 67 before pulling through the front gates at the 63-year-old facility.

Started in 1998 by Gregg Borland, The Sheboygan Falls-based team began fielding cars in junior open-wheel racing and has now developed into a premier team on the Mazda Road to Indy, with a short but rich history of competitive cars and drivers.

“I worked in Skip Barber for many years. I did driver coaching and teaching, then test driving for them,” said Borland, team owner of ArmsUp Motorsports. “We had a Formula Continental car and it was fun, we did probably six or seven events a year. One of my friends from Skip Barber decided to buy a Formula Continental [as well], so we bought the car and started running him and we still had the rental car. The next thing you know, he’s out telling his buddies and another guy came along and before I knew it, we had four or five Formula Continental cars and that was basically the start of the whole thing.”

Over the past five seasons, ArmsUp has fielded talented drivers associated with the Mazda Scholarship. In 2014, Birchwood, Wisconsin’s Aaron Telitz captured his first Mazda Road to Indy Presented by Cooper Tires victory at Lucas Oil Raceway with Borland and the team before going on to with the 2016 Pro Mazda Championship with Team Pelfrey and graduating to Indy Lights Presented by Cooper Tires.

“ArmsUp is awesome!” exclaimed Telitz. “They really want to work with their drivers, their engineer [John Walko] is very hands on and knows how to communicate with drivers really well… It’s such a fun family atmosphere. It’s a great team to learn from and have fun, and I got my first win with them on the Mazda Road to Indy, so their cars are quick too.” 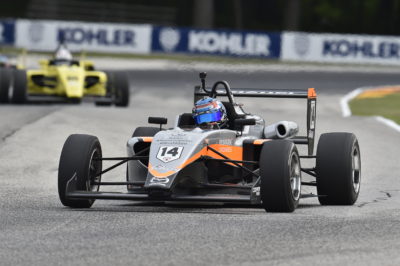 In 2016, Brazilian Indy Lights driver Franzoni made the switch to ArmsUp after consecutive seasons with a rival team in USF2000. His three race wins, two pole positions and third-place finish in the championship with ArmsUp positioned him for a ride in the Pro Mazda Championship with Juncos Racing. Franzoni would go onto win the series championship and guarantee his spot in Indy Lights with the Mazda Scholarship Award.

“For me, they were a huge help. I was in a year where I didn’t have anything and I didn’t know if I was racing or not and they gave me the opportunity to race,” Franzoni described. “It was amazing, we had a great year together, we won three races and we were fighting for the championship until the last race. They did a great job when I was there and they did a great job when Telitz was there. They are great friends of mine and are part of my success.

The team’s 20-year history of competition is impressive in its own right, but Borland will tell you there’s something more special in the fabric of the family operation.

“We’re determined and serious about winning races, but you got to keep it light. That’s what I enjoy about it, the personalities of the drivers really come out because the personality of the rest of the team is out there and it’s enjoyable…I’ve seen so many kids come out of karting and they’ve been racing for eight or ten years and it’s almost like it is not fun for them anymore. I’d like to see them lighten up a little bit, so we work really hard to get the driver’s personality out and into the program. It makes it fun.”

This weekend, ArmsUp welcomed back the 2016 Mazda Scholarship Driver, Dakota Dickerson and added Max Peichel to the team. Dickerson would lead the team with a best finish of ninth-place in Race 2. As for former drivers Telitz and Franzoni, Telitz would finish third in his home race while the 22-year-old Brazilian Franzoni would capture his first Indy Lights win, dedicating the win to Jeff Green, his former Pro Mazda teammate, who tragically lost his life last weekend in an auto racing accident in Canada.

As the post-race ceremonies ensued, the former ArmsUp drivers congratulated each other on their hard-fought performances, something fans of the Mazda Road to Indy could potentially see from the drivers in the Verizon IndyCar Series in the future.

Before all three Mazda Road To Indy series head to the streets of Toronto, July 13-15, the Indy Lights Presented by Cooper Tires will compete on its second oval of the season at Iowa Speedway, July 7-8.

Colton Herta continued his mid-season domination, capturing his fourth win in a row after passing Juncos Racing’s Victor Franzoni early in Round 8. After a pass on Lap 6, Herta would cruise to his fourth victory of the season, with teammate Pato O’Ward and Franzoni rounding out the podium. On Sunday, it would be Franzoni passing O’Ward and Santi Urrutia at the exit of Turn 5 after the two made contact. He would cruise to his first win in Indy Lights, an emotional one for the rookie and Juncos Racing after losing former teammate Jeff Green in an auto racing accident on June 16. Herta and Telitz finished second and third, respectively. Herta holds on to the championship lead with a 17-point difference over O’Ward and 44-point advantage over Urrutia. 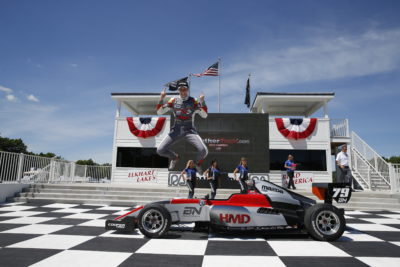 Chicago, Illinois’ David Malukas dominated the weekend at Road America. On Thursday, Malukas set a new track record by over three seconds. His record led to the pole position and the 16-year-old would the lead the field flag-to-flag for his first Mazda Road to Indy victory. Malukas’ momentum carried into Round 9, once again leading for the entire race and capturing his second win of the season, with his teammate Toby Sowery closely behind for the team’s second one-two finish in as many days. Parker Thompson holds a 46-point advantage over Rinus VeeKay and a 49-point difference over Carlos Cunha.

Swedish rookie Rasmus Lindh swept the weekend qualifying sessions, clinching his first two career pole positions on the Mazda Road to Indy. Championship leader Kyle Kirkwood passed Lindh at the start of the race through Turn 1 and would lead the 12-lap contest for his third consecutive victory. Sunday morning’s event would be full of drama, with 12 cars not finishing the race and Kyle Kirkwood completing a last-lap pass Lucas Kohl ahead of Turn 1. Kirkwood would hold off Pabst Racing’s Kaylen Frederik and Kohl, capturing his fourth win in a row. The 19-year-old American now holds a 94-point lead over second-place, Alex Baron, in the championship standings.