SCCA and SCCA Enterprises announced the new Formula Enterprises 2 class a few months back, and now the first cars are showing up in U.S. Majors Tour competition around the country. The original Formula Enterprises car is a Van Diemen chassis with an engine that was used in Ford and Mazda vehicles. That engine, however, is long out of production, thus necessitating a new powerplant. Mazda’s tried and true MZR engine, a version of which is used in everything from NC MX-5s in Touring 4 to the Cooper Tires USF2000 Championship to the Mazda RT24-P prototype in the IMSA WeatherTech SportsCar championship, was an obvious choice. Paired with a ZADEV sequential transmission, the new package is a substantial improvement – and it’s surprisingly easy to make the conversion.

“It’s a really nice kit,” says Kevin Kloepfer, CEO of Comprent Motor Sports, a prep shop that specializes in formula cars and sports racers. “Enterprises did a really nice job; it’s just about a bolt-in. It’s probably about a day-and-a-half to do one. It’s pretty straightforward – you get a new wiring harness, ECU, everything…. Where we used to have to adjust the fuel pressure to optimize our Lambda, it now has a closed-loop system.” 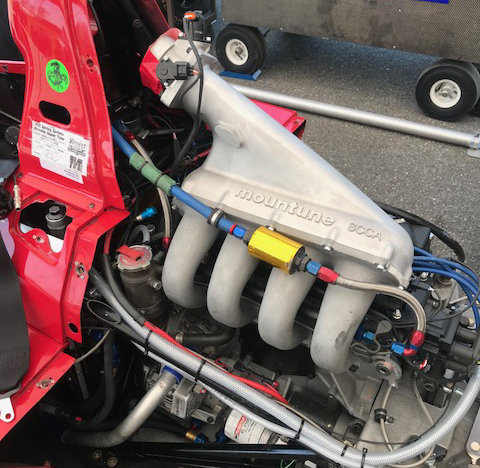 The SADEV transaxle, which includes no-lift shift and auto-blip capabilities, is an option for both the FE2 and original FE cars. Formula Enterprises will be allowed to run through 2019, but after that all cars will be required to make the switch. Todd Vanacore, one of the first to make the conversion with Comprent, says the new engine and transmission are good enough that most will want to upgrade sooner rather than later. “I was pleasantly surprised at the performance,” said Vanacore, who won the Sunday race at the 2018 VIR SCCA Hoosier Racing Tire Super Tour. “It’s supposed to be 12-14 more horsepower. At VIR I was consistently two to three seconds a lap quicker than I was in the FE. It’s quite a package, and as far as I’m concerned, it was well worth the wait.”

Vanacore raced Spec Racer Ford prior to switching to FE, and says that with the new engine and transmission, FE2 is perhaps the biggest bang for the buck in club racing right now. “The performance and reliability is unbelievable. The new SADEV transmission is actually overkill for the amount of horsepower the car puts out, so it’s going to last.”

Vanacore says the package and install was around $21,000. Used FE cars can be found anywhere form $15,000 to $35,000, depending on age and spares, with most falling right in the middle of that range. That means one could get into FE2 for well under $50,000. For those who already have an FE, the switch is even more affordable.

“It makes a little more horsepower,” says Vanacore. “Instead of 6,300 max rpm, it’s now 6800. It definitely increases the performance a lot. It’s 20 pounds lighter, that comes off the rear of the car. It’s like night and day.”

Formula Enterprises 2 will run as a separate class from FE for 2018 and ’19, including at the SCCA National Championship Runoffs.