Birmingham native Andrew Pinkerton impresses in series debut to claim Idemitsu Hard Charger as Belluardo scores Challenger Cup victory and Palermo takes Masters win
Birmingham, Ala.  (April 20, 2018) – After 45 minutes of green flag racing, just 1.6 seconds covered the top five finishers as Idemitsu Mazda MX-5 Cup presented by BFGoodrich® Tires staged another thrilling race at Barber Motorsports Park on Friday.
Emerging from the fray to score the victory was Nikko Reger (No. 0 1 Slipstream Performance), who took the checkered flag just 0.0983-seconds ahead of Bryan Ortiz (No. 4 Copeland Motorsports). Joey Bickers (No. 34 McCumbee McAleer Racing) crossed the line in third to complete the overall podium.
After getting a last-minute call-up to step into the No. 23 entry in his first-ever professional race start, Andrew Pinkerton (No. 23 Jason Hoover Motorsports) jumped into the Ceramic Pro-sponsored entry and raced his way forward to claim the Idemitsu Hard Charger Award for gaining the most positions. 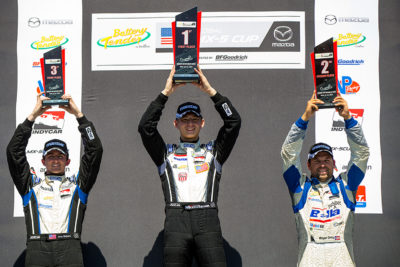 Charlie Belluardo (No. 73 Flatout Motorsports) kept his “Challenger Cup presented by Monticello Motor Club” win streak alive with his third class win, as Hernan Palermo claimed the (No. 20 Slipstream Performance) Masters category honors for his run to 11th overall.
There is a lot on the line in every Mazda MX-5 Cup  race, as the series champion will emerge from the year-end awards with a $200,000 prize from Mazda while the top rookie will score some $75,000 in racing support. The field of nearly thirty racers demonstrated their motivation right from the drop of the green flag, as the drivers fought hard for position on the 2.3-mile circuit all the way to the checkered flag, with some 276 passes being completed during the 45-minute race.
“This feels great,” said Reger of his fourth series victory. “It’s a new team, a new year and I think we finally pulled it all together today. Those last couple of laps were pretty crazy. We hit some traffic in the end and that’s when I wanted to make moves. I knew I had a good, fighting chance of getting in the lead. I just took my time and used every ounce of my patience to not make a move on Sparky, who was leading at the time. Whenever I did get around, I saw Ortiz had gotten around too and I knew he was fast. I picked my marks and tried to drive the best lap of my life on the last lap and I guess it was!”
Ortiz had been hoping to double his Mazda MX-5 Cup win tally, but was still pleased to score another strong podium on Friday.
“The whole race was pretty good,” said Ortiz, who grew his lead in the overall championship. “I didn’t think we had a car to be there at the finish—we had to fight the whole race. Everybody raced really clean. We’re happy. We came close. We were thinking about the big picture, about the championship, and we want to be there at the end. We’re happy to get second, get good points and this is for a friend of mine Tatiana whose mom, Donna, died this week. I have to thank my sponsor, Bella Group, because I could not do this without them. We had challenging couple months for sure after the hurricane. The people of Puerto Rico are working hard and doing the best we can. We still need help to get the island going, but we’re getting back on our feet little by little.”
After John Mauro had to miss the race weekend, Pinkerton got the nod for the Barber event as he looked to put his local knowledge to good use. Despite not having driven a Mazda MX-5 Cup machine before the race weekend, the Birmingham native showed he was a quick study.
“I didn’t get the greatest of starts,” said Pinkerton. “There was a big checkup at the start. The polesitter really waited until the last minute to give it the beans and go. I struggled at the start and a few cars passed me. I tried to go around the outside and it didn’t work. There was a lot of action. I capitalized on a lot of other people’s misfortune. There were a few spinners in front of me. The one car that passed me was Zach Lee. He ran me down fair and square once I overheated my tires.  I really learned a lot today. It’s my first start in the series and first time running that long in the dry in these cars.  I’m looking forward to tomorrow. The BFGoodrich tire was awesome and now I know not to abuse it on the backside of the course!”
After winning both the “Challenger Cup presented by Monticello Motor Club” races at the Circuit of the Americas, Belluardo kept his streak intact with a return to the top of the Challenger Class podium to open the weekend.
“It was an amazing race,” said Belluardo. “I was able to see the video screens going into turn 11 and keep an eye on my competitors. The level of driving talent out here is amazing, thanks to Mazda, Idemitsu and Monticello. And thanks to Flatout Motorsports which gave me a great car today.”
Also taking part in the post-race podium was Slipstream Performance racer Palermo, who was the highest finishing driver in the Masters category.
“I just happened to be the fastest old guy today, basically!” said Palermo. “We were in a pack at the beginning that got a bit tangled and we lost touch with the lead pack, and I ended up 11th overall. I’m starting a little bit further up front tomorrow so hopefully we can win Masters and get a better overall result.”
The race weekend will resume on Saturday with the second race of the weekend, which will be streamed live https://youtu.be/UWytWF2mam0 at 9:45amcentral, April 21st.
Updates will be available via https://twitter.com/GlobalMX5Cup, with results to be posted with news and updated photos at https://mx-5cup.com.