The 2018 edition of the Idemitsu Mazda MX-5 Cup presented by BFGoodrich® Tires kicks off at with a doubleheader at Circuit of the Americas next week, the first of a six-weekend season that concludes at Monticello Motorsports Park on Sept. 28-29. In between, the series heads to the likes of Barber Motorsports Park, Road America, Mid-Ohio Sports Car Course and Portland International Raceway, offering racers challenges in the form of both racers and circuits.

The series held its official pre-season test at Barber on March 3-4, and while testing doesn’t necessarily mean much in terms of how the season will go, it offers a glimpse of who could be a contender. Consistently at the top of the charts were 2016 champion Nathanial Sparks, 2017 Rookie of the Year Robert Stout, Robby Foley, Nikko Reger, Joey Bickers and Hernan Palermo. Reger set the fastest time of the test, and while he didn’t complete the 2017 season, he has his sights set on the title in 2018 if he can secure the funding. 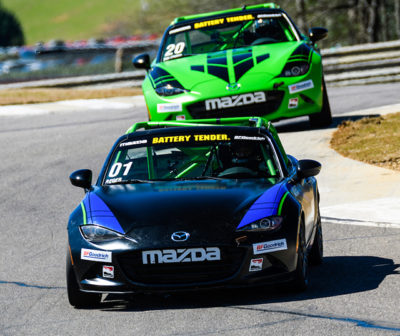 “I think myself and the rest of the Slipstream team is looking forward to a very productive season,” says Reger. “I think I showed a good, consistent pace that will hopefully continue as the season wears on. Personally, I don’t want anything less than the championship. I think I had a good chance in 2016, but a serious crash got in the way of that; and then in 2017 I fell short on funding. So I honestly believe this is the year I could clinch the championship – but it won’t be easy. I have strong competition from all over the field, coming from each team. Whether it’s Bickers, [Bryan] Ortiz, Stout, [Nathanial Sparks] Sparky, Foley, [Selin] Rollan or my own teammates … I could list the whole field, because just about everyone is fast and has found success in the past.”

Like Reger, Stout is focused on the title. He says he believes turning down the aggression a bit might be the key as he starts looking beyond victories and at the bigger picture of the championship. Stout only attended one day of the test but was in the top four each session, and quickest in one. His teammate Bickers, a winner of the Mazda Road to 24 Shootout several years ago, was right there with him.

”I have a lot of new teammates at McCumbee-McAleer Racing,” says Stout. “Joey Bickers, he’s the shoe for sure. He was there every session, top three, every session of the test. I wasn’t able to make it on the second day, but he was fast. That was something I was very happy to hear. There’s always going to be competition, but as long as that competition is on my team, we’re able to work with each other and help each other, very similar to what Patrick Gallagher and I did last year. Joey Bickers is going to be a big one to watch. Bryan Ortiz, whom I battled with really aggressively last year for Rookie of the Year – there’s no doubt he’s a championship contender, as well as former champion Nathanial Sparks.”

Selin Rollan, the winner of the 2017 Road to 24 Shootout, acclimated quickly to the MX-5 Cup car. He was in the top five in a couple of sessions, in his first time at Barber Motorsports Park. “The car is a lot of fun – different than what I’m used to and have driven for the last nine years, but I’m up for the challenge,” says the Spec Miata graduate. “Two main differences being the power steering and ABS. On a spec Miata, I would have to be very light with my braking just to get the car not to lock up; in the Global car, you can hit the brake so hard without even dreaming about locking up! As far as the power steering, there was none on the Spec Miata. I remember just whipping the car around with fast hands no problem. But in the Global car, smooth and very slow hands definitely seem to be the answer.”

The 2018 Idemitsu Mazda MX-5 Cup presented by BFGoodrich® Tires season begins at Circuit of the Americas in an event with Pirelli World Challenge on March 23-25.