It’s one thing to win the SCCA Runoffs, it’s another to do so in dominant fashion in a spec class, not to mention winning the SCCA National Super Tour Points championship along the way. That was Elliot Finalyson’s season in a nutshell.

“I think we felt pretty prepared coming into the year,” Finlayson says of his sophomore season racing cars. “I didn’t expect for the Runoffs to go the way it did. I thought it was going to be a real hard battle. But I think all year long we improved – not only myself, but the car. We learned a lot along the way, too.”

Finlayson and his father prepare the car they’ve been racing for the past two seasons since he moved from karts. The duo completed the 2017 FE season undefeated, winning some of the big ones – the June Sprints, for one, before the Runoffs. The successes certainly validated their choice to race in Formula Enterprises. 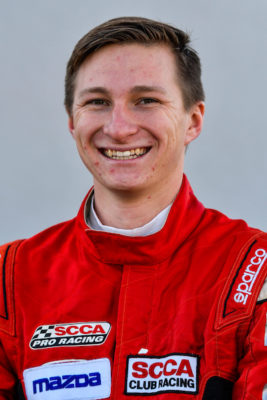 “The budget was really friendly,” says Finlayson. “I think that the class was growing a lot, and we noticed that as well. Primus came on board, and John and Brad Baytos were a big help; they were a big push in me being involved in the class. The car is a nice little car – it’s not too expensive, it’s a wing car and it’s got backing from Mazda, so that was nice as well.”

The fact that the FE is a Mazda-powered spec class meant that Finlayson earned an invite to the Mazda Road to Indy Shootout in December thanks to his Runoffs win. Even before the SCCA championship event win, though, people had taken notice of the young driver. He was one of the finalists for Jeremy Shaw’s TeamUSA scholarship, where the 21-year old from Yorkville, Ill., impressed – even if he didn’t become one of the two drivers to race in the UK. He also made an impression on the judges in the Bondurant Formula Mazdas at the MRTI Shootout, although once again he missed the cut. Despite everything, he learned a thing or two along the way.

“I think the biggest thing that prepared me for [the MRTI Shootout] was being involved in the TeamUSA scholarship,” he says. “Jeremy’s program is run a lot like this, so I was trying to take the things I learned there and improve upon them and progress myself. [The judges] are helping a lot with braking points and releasing the brake and blipping the throttle. It’s different for many of us, using an H-pattern gearbox; for me, it’s definitely the first time I have used one in a car. And learning a new track … [the Bondurant] track has all kinds of corners – late apexes, early exits, big long carousels and all kinds of different stuff. Being diverse in what you can drive and where you can drive is always good.”