Miatas at SVRA events have brought out drivers who have been sitting on the sidelines, and steered others toward racing differently

The idea of the Miata in vintage racing may still be a bit hard to grasp, even though the first cars are now 27 years old. With the creation of the Mazda Miata Heritage Cup by the Sportscar Vintage Racing Association (SVRA) and Mazda Motorsports, those early cars now have a place to race on select SVRA weekends. The no-contact, relaxed environment, along with the opportunity for 1.6-liter cars to race amongst themselves, is bringing out some drivers who haven’t raced for a while – and they’re singing the praises of the new series.

“It was a small field, but the racing was very good,” says Mike Winebrenner of the most recent race at Road America. “We had everything from guys who were frontrunners at the [SCCA] June Sprints to guys who haven’t done it in 10-plus years but, because of the SVRA, thought they’d go out and do it again. I’ll go back and do this again; it’s a little less intimidating process of starting. That was part of the draw. I raced Spec Miata 10 years ago and I was pretty competitive back then, but I was a little intimidated getting back into it.”

Because the 1.6-liter cars aren’t as competitive in SM, and because of the frequency of bumper-to-bumper contact in Spec Miata, Winebrenner hasn’t been driving the car despite holding onto it all these years. SVRA has a no-contact rule, and strict penalties for violating it. That has attracted some others who have been turned off by the preponderance of contact in the class in SCCA and NASA.

“The problem is these cars are grouped so closely together, and it’s a class that’s known for contact,” explains Tony Fornetti, who finished second in the Road America Miata Heritage Cup. Fornetti was running the SCCA Majors this year, but after running with SVRA, has changed his focus.

“We thought we’d use it as a precursor to the June Sprints,” he continues. “It’s $300 to run, it’s a fantastic deal. We had no idea what we’d be in for; it’s like a car show – the machinery that was there was incredible and it’s spectator friendly. We rolled the car to the back of the trailer, let the kids sit in it. Everybody that came by had a Miata story. It was just a different atmosphere.” 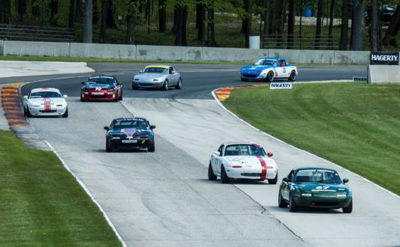 Fornetti wanted to race at Indianapolis Motor Speedway for the Runoffs, but he hopes that SVRA will add the Heritage Cup to the schedule for its Indy event in the future. “At some point, we’d like to go to Indy – I’d like to run at Daytona. But I’d like to learn these tracks at my own pace. If there’s a no-contact rule and all the racers know that, I can go to a track I’ve never been to, learn it at my own pace, come back in one piece and have a great time doing it.”

Dave Wheeler, owner of Advanced Autosport, a prep and rental shop in Wisconsin, was a last-minute entry into the Road America field, but he’s glad to have done it. “For the guys that don’t want to drive at 99.99 percent and who are tired of doing bodywork and want to go have fun and take some pressure off and enjoy the car, it’s perfect,” Wheeler says. “Their no-contact rule is part of it. You’re not trying to win anything, you’re just out there for the enjoyment of it. If you take the edge off it, it’s more fun.”

Wheeler says he believes the class will grow and says he has received several calls from customers inquiring about running future SVRA events. The next SVRA race that features the Mazda Miata Heritage Cup will be at Mid-Ohio Sports Car Course on June 22-25, followed by events at Portland International Raceway in July and VIRginia International Raceway in September.

“Hats off to Tony Parella at SVRA,” says Winebrenner. “He runs a great race event, but also hats off to him for thinking outside the box and running this class. He’s definitely thinking about vintage racing for a younger generation.”