Drift cars need power, and the more power the better. It’s a lot easier to pitch it sideways under throttle with plenty of oomph under the right foot. Because Mohan has spent so much time working with Mazda rotary engines, he stuck with it when he switched from the RX-8 to the Miata. Obviously, though, it’s not your standard turbo two-rotor such as you would find in an FD RX-7.

“The motor combination is pretty exotic,” Mohan explains. “We’re running a 20B that we bring in from Japan. We take it apart and it’s completely machined, balanced, studded, blueprinted, ported, polished, and lightened – you name it, we do it, to sustain the high levels of boost. The motors try to expand, so basically we’re pinning them internally, replacing the tension bolts with studs that are half-inch. It takes a lot of time – I’ll spend 100 hours building these motors, but what you get is a very reliable platform.

“At 21lbs of boost, which was our dyno boost target, with no nitrous, we did 821hp. But our at-track target boost is 37, and we add nitrous on top of that, so our estimate right now is that we’re somewhere around 1,000 to 1,200hp at the wheels, with a flywheel rating around 1,400. I based it on a lot of motors I built for drag racers that are running over 48psi, and they’re over 2,000hp. I consider what we’re doing in drifting to be the detuned version, getting that reliability and sustainability.”

Mohan uses Haltech fuel injection with six 200cc fuel injectors. However, he says those are almost maxed out, so he’s looking at using nine injectors. Power is delivered to the ground through a Jericho 4-speed transmission with a Winter’s quick-change rear end. The suspension is extremely modified, primarily because a drifter needs much more steering angle to get more slip angle out of the car. Mohan’s Miata has 70 degrees of steering angle. The rest of the suspension is designed to keep the tire flat at those extreme angles. “When you drive these cars like a road race car in a straight line, they really don’t want to – they’re engineered to go sideways,” Mohan says.

“We already knew what kind of horsepower we could generate, and when you’re talking about racing, what do you want? You want to be lighter with more horsepower,” he says. “So we got the smallest car that Mazda made, and put the biggest motor we could, which is our 2-liter Mazda rotary. A lot of our competitors question it – it’s very small compared to some of the other cars, which does make it a little twitchier. But I grew up in small cars – early Mazdas, the RX-7s, Miatas – so for me it was almost a return to what I learned in and started in. People ask me which I like more, but I still own both…I daily drive an RX-8. They each have wonderful characteristics.”

Look for Mohan in the Formula Drift events. You can catch upcoming competitions at Road Atlanta (May 12-13) or Wall Raceway in New Jersey (June 2-3). 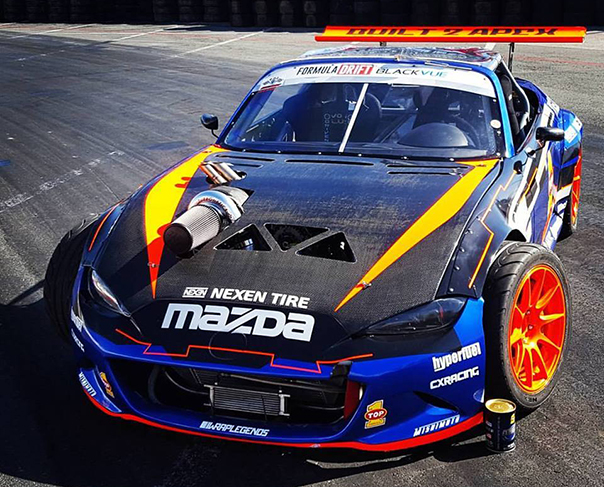