Almost any racer will tell you there is no substitute for track time. Spec Miata racer Danny Steyn knows that, and as a result, started entering his Spec Miata in Street Touring Lite at SCCA club races to get more track time. He quickly discovered, however, there are better routes to go.

“Unfortunately, it puts you in the proverbial kill zone, where there is a lot of horsepower and less talent, and you’ve got talent and a car with no horsepower,” Steyn explains of entering STL in Spec Miata. “It creates a tremendous amount of carnage.”

He decided he needed to get to the sharper end of the STL grid and acquired a dedicated car to do so. Jesse Prather had an NC MX-5 prepared for STL, formerly campaigned by Bob Schader, and Steyn bought it sight unseen. Once he had the car, he realized it had potential but it still needed some improvements. Steyn set to work on it and has been tweaking it ever since. As delivered, the car was very stiff; Steyn has made it more compliant in order to be able to get on the throttle sooner. 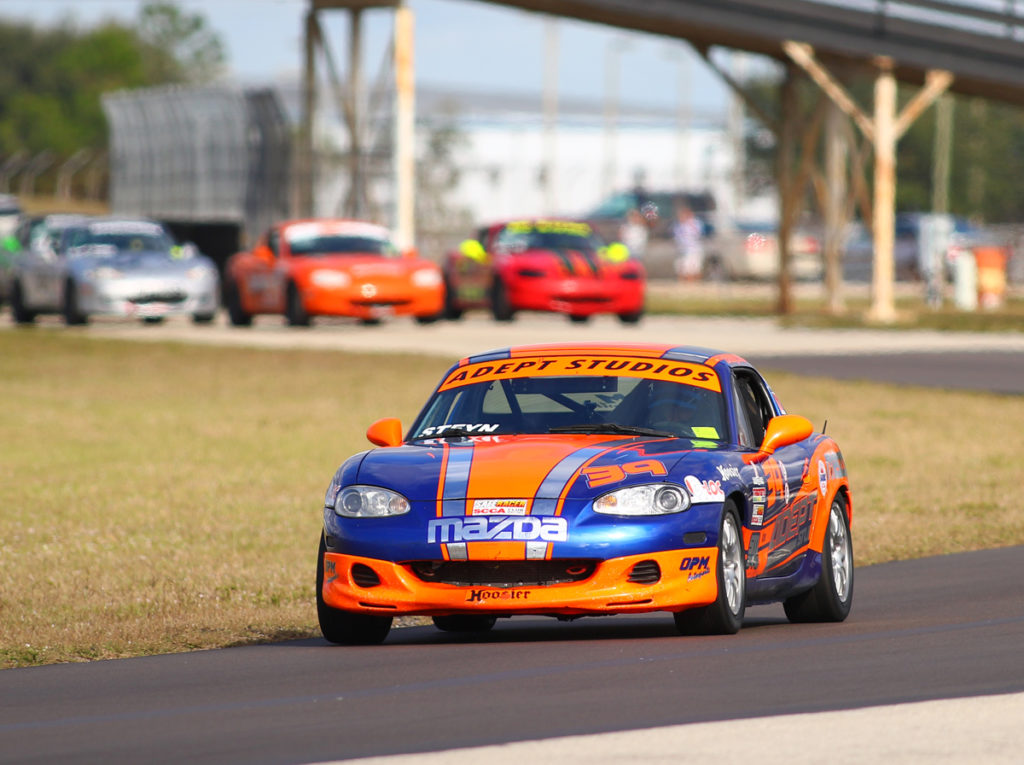 “The wonderful thing about Miatas is that they are this incredible handling platform,” says Steyn. “A Spec Miata can often go through a turn as quickly as a GT3 Porsche. It’s an amazing car – it’s light, it’s got great balance, it’s a handling dream. In motor racing, a lot of people chase suspension as a way to get more horsepower to the road. What I found is a more compliant suspension allows you to handle up the bumps. We were skipping and bouncing instead of taking a set. If you’re skipping and bouncing, you can’t get into wide-open throttle, and the earlier you commit to wide-open throttle, the faster that you can go. We worked with the suspension to commit to throttle earlier than we were able to in the beginning.”

With a Jesse Prather-built motor, the car has good power from the MZR engine. After the changes Steyn made, the car is quite quick, and he has set several lap records. The problem, though, is he hasn’t been able to convert that quickness into race wins. He won at the Sebring SCCA Hoosier Super Tour in January, but that’s been the exception rather than the norm.

The front-wheel drive competition in STL is often lighter, with a little more power and a lot more torque. That means while Steyn may start on the pole, by Turn 1 he’s usually been shuffled back, and his advantages in braking and handling can’t overcome the competition’s edge on the straights in a race.

“This is the scenario we find ourselves in right now,” he says. “I can run very fast lap times, but I’m struggling to win races. That’s the interesting part of this class. I’m not saying the class isn’t balanced, but we cannot do it on engine performance. We’re going to have to figure it out in braking and handling.”

Still, he’s committed to keep working on it. He may try the six-speed gearbox, which has closer ratios than the five-speed he’s running now. Some rear-end ratio changes have helped, so Steyn is looking at the gearbox and some more handling tweaks to move up – his focus remains on getting to maximum throttle as early as possible.

“We’re in this for the long haul and trying to get to the front,” he says. “It’s nice having lap records, but what we’d rather have are wins.”