The autocross community is full of talented drivers, and Mazda wants to help those drivers take it to the next level.

For many SCCA autocrossers, Solo competition is the destination; for others, autocross is a great place to hone their skills while sorting through the financial realities associated with wheel-to-wheel racing. Over the years, Solo champions like Randy Pobst, Peter Cunningham, Jason Saini, Tom O’Gorman, and Bryan Heitkotter have shown that the skills that took them to the top of the Solo ranks translate well to road racing – and Mazda wants to help find the next breakout star.

“Drivers like Randy Pobst have proven that there is phenomenal talent in Solo, and if you find that gem, he or she could be very influential in the sport,” says David Cook, Manager of Mazda Motorsports Business Development.

For some time, the team at Mazda Motorsports has been trying to find a way to activate and engage top Solo talent in the same way Mazda has helped many club racers realize their dream. In 2016, Mazda took a bold step in this direction when they invited autocrosser Julian Garfield to take part in the Mazda Road to 24 shootout, an event typically reserved for amateur road racing champions. “He was exceptional; better than we had even hoped as far as performance on and off the track,” Cook says of Garfield, noting that Garfield had previously tried his hand at club racing but returned to autocross, possibly for financial reasons.

Mazda’s experiment reinforced what Mazda already suspected of autocrossers: the talent and desire is there, it simply needs to be cultivated. Inspired in part by this test case came the new Mazda Solo Advancement Scholarship, which will give Mazda the tools to help autocrossers who want to step into road racing. “We wanted to cast our net wider in a pool that is filled with lots of talent – autocross – and perhaps bring a special individual closer into the Mazda family and extend the resources and support to potentially realize his or her dreams,” says Cook.

The Solo Advancement Scholarship will award $20,000 to a Solo competitor for the purpose of Club Racing a Spec Miata. Based on his performance at the Mazda Road to 24 shootout, Garfield was selected for the trial run of this exciting new program in 2017. “Julian is going to run with Advanced Autosport and Dave Wheeler,” says Cook. “We are working to finalize the details, but the plan is for Julian to run one divisional event to get his feet wet once more, three Majors, including the June Sprints Hoosier Super Tour event, and the National Championship Runoffs.”

For Garfield, who is a full-time college student, the idea of a return to road racing in the near future was not likely, but this program changes that. “I got the call right before Christmas and I’m very excited about it,” says Garfield. “Just getting into the Mazda Road to 24 Shootout was a total surprise. While other guys were out road racing and striving for it, as a Solo competitor I wasn’t even thinking about it. It was a great experience.

“I had no intentions of going club racing this year, or the foreseeable future actually,” Garfield admits. “I would have just stuck with Solo because of the budget. But this scholarship from Mazda is a total game changer for my schedule this year.”

While Garfield will be racing his way toward the 2017 SCCA National Championship Runoffs at the Indianapolis Motor Speedway in late September, Mazda will be hard at work discovering the next Solo driver with the talent, determination, and desire to be the next Solo Advancement Scholarship recipient. 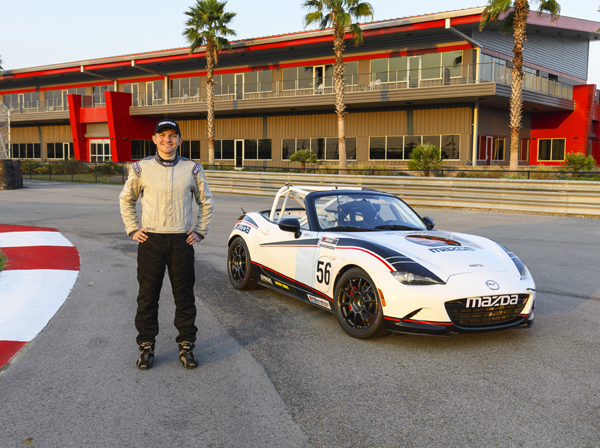