IRVINE, Calif. (September 26, 2016) – The 2016 IMSA WeatherTech SportsCar Championship will come to a conclusion Saturday with the running of the 10-hour Petit Le Mans presented by Harrah’s Cherokee Casino Resort. The Mazda Prototype team will try to continue a qualifying hot streak and strive for their first endurance victory. In the end, the battle might be between the two Mazda entries to see which prevails in the point standings. After nine races, Jonathan Bomarito and Tristan Nunez (No. 55 Mazda Prototype) are tied for sixth in Prototype points, while teammates Joel Miller and Tom Long (No. 70 Castrol Edge/ModSpace Mazda Prototype) are immediately behind, separated by only two points. The endurance clash begins Saturday at 11:10 AM ET. It can be streamed in its entirety on the Fox Sports Go app or at RadioLeMans.com, while live TV coverage will consist of the opening hour on FS1, then 2:30 to 6 PM ET on FS2. A three-hour recap of the race will be televised by FS1, Sunday from 5 – 8 PM ET.

We spoke with the 20-year-old Floridian Tristan Nunez about his view of what’s to come on the 2.54-mile, 12-turn Georgia circuit.

“Road Atlanta is a very special and tricky track,” Nunez said. “It has a lot of elevation and a lot of grass on the outside [of the racing surface]. Usually, when you get off onto the grass, it accelerates you into the wall. It’s high risk, but you’ve gotta be fast, run hard and stay consistent for 10 hours. It’s a tough race and a physical track that’s hard on the drivers and on the cars. You’ve got to put it all on the line, but bring the car back to your teammate. It’s one of my favorite tracks, by far. I grew up racing Skip Barber (open-wheel cars) there and learned it’s one of those ‘unknown’ tracks as you never know which way your luck is going to go: good or bad. But that’s what makes it fun being a racing driver.”

The qualifying results for the No. 55 Mazda have been very strong in the second half of the season with a league-leading three pole positions and starting on the front row in five of the last six races. What kind of speed do you expect from both cars at Road Atlanta?

“This is definitely a track where we can get another pole,” Nunez said. “It suits our car with a lot of high-speed corners and some technical areas. But, qualifying isn’t the main focus: it’s getting to the end of 10 hours. Qualifying is important – always – but not as important as for shorter races or a track where it’s really tough to pass. There are a lot of great passing opportunities at Road Atlanta. The key is getting to the last two hours of the race and then racing hard from there. That’s when you get past the ‘endurance’ part of the day and it becomes an ultimate sprint race in the nighttime.”

IndyCar driver and four-time Mazda driver development scholarship winner Spencer Pigot will join the team for the fourth time this season, serving as a third driver for both of the Mazda Prototype entries. Pigot has done well as a rookie in the Prototypes, including leading the race at Watkins Glen. What does that mean for you to have an extra teammate?

“Bringing in a third driver is one extra person you have to trust with your baby – my Mazda Prototype!,” laughed Nunez. “We’ve built a relationship with Spencer since he was our third driver at Daytona. He’s a great ‘plug-n-play’ guy – he’ll drive anything and drive the wheels off of it and we have all the confidence he’ll bring it back in one piece. We’re excited to have Spencer back.”

The End of a 60-Year Era
Due to changing regulations for 2017 and beyond, this weekend marks the final time the Mazda Prototype team will race their existing chassis. The Mazda Prototype LMP2-category cars were born in 2012 as Lola B12/80s, the final race car designed by Lola Cars, a company founded in 1958 by legendary designer Eric Broadley. The British company would go on to create some of the most beautiful and successful sports cars and open wheel race cars of the next five decades. When Lola was forced into administration (bankruptcy), Canadian automotive and racing manufacturer Multimatic and Carl A. Haas Auto took over the Lola name and inventory. Multimatic has been a technical partner with Mazda to continuously develop and improve the chassis since Mazda began the current Prototype program in 2014.

“It gives me goosebumps to finish the season with the last Lolas that will ever race professionally,” said Nunez. “Growing up, watching Lolas, they were always beautiful cars. The history behind Lola is iconic, and it has held a special place in my heart since I climbed into one in 2014. To be saying good-bye to the car is bittersweet. Everyone says that we have the most beautiful car out there. And we do, but I have the utmost confidence the next car is going to be just as beautiful. I’m honored to drive it in its last professional competition.”

Mazda will unveil its plans for Prototype racing in 2017 (and beyond) later this year.

MAZDAS, MAZDAS, MAZDAS
The Prototypes won’t be the only Mazdas concluding the season at Road Atlanta this week. Two races to crown a champion in the Idemitsu Mazda MX-5 Cup presented by BFGoodrich® Tires series will take place Thursday, while a new champ will also be determined in the Mazda Prototype Lites presented by Cooper Tire series. Friday’s headline event is the finale for the Continental Tire SportsCar Challenge, where Mazda drivers Chad McCumbee and Stevan McAleer lead the standings in the ST category.

Mazda STEM Heads to South Atlanta High School
Mazda Motorsport’s national-touring #MazdaSTEM (Science, Technology, Engineering and Math)  program will visit South Atlanta High School Tuesday for three presentations. As a part of the R.A.C.E. (Racing Accelerates Creative Education) program, students will meet Prototype driver and mechanical engineer Joel Miller and Mazda racer Liam Dwyer, who lost his left leg in 2011 in Afghanistan but now races professionally with a prosthetic leg. The #MazdaSTEM program aims to motivate students to consider the many career opportunities in the STEM disciplines. (Media are encouraged to attend the event at 800 Hutchens Rd SE, Atlanta, GA 30354. The programs will be 8:45 – 10:15 AM, 10:30 – Noon and 1:00 – 2:30 PM. Contact Jade Gurss for details.) 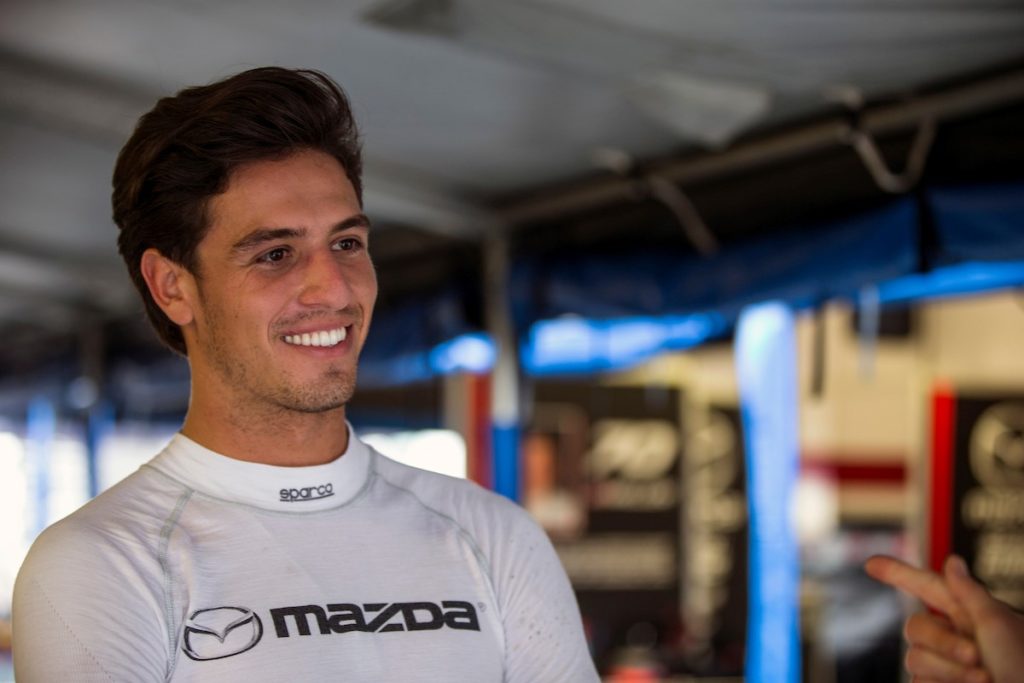