(Ed Jones, Indy Lights points leader, pictured above.)
This weekend at the Mid-Ohio Sports Car Course, the three categories of the Mazda Road to Indy will compete in two races each. The results of each will be critical to help determine who will take home the Mazda driver development scholarships for 2017.
The Indy Lights champion will earn a Mazda scholarship of more than $1 million that enables the driver to compete in at least three starts in next year’s Verizon IndyCar Series, including the Indianapolis 500. In Pro Mazda, the title winner earns nearly $600,000 toward a ride in the Indy Lights category, while the USF2000 title-winning driver earns almost $380,000 toward a Pro Mazda ride in 2017.

Each of the three series will crown champions at the Mazda Road to Indy Finale weekend at Mazda Raceway Laguna Seca, September 9 – 11.
Follow all of the action streaming live at RoadToIndy.tv and the Road to Indy mobile app. You can also follow the Twitter hashtags #MRTI and #IndyMO.

Indy Lights powered by Mazda
The hottest driver in the series, Felix Rosenqvist, dominated both races at Toronto, but has missed several races due to European commitments. That means he is not in the points chase, but there are five drivers – possibly six – still in the hunt with five races remaining in the 2016 season. 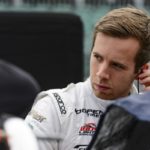 Ed Jones (pictured left), a British driver by way of Dubai who finished third in the championship last year, has held the points lead for much of the season for Carlin Racing. His closest pursuer is Uruguayan rookie Santiago “Santi” Urrutia, who carries the Soul Red color as a Mazda scholarship driver. Urrutia, last year’s Pro Mazda champ, is 24 points behind Jones in the No. 55 Schmidt Peterson Motorsports entry.

Third through fifth in the standings is very tight, as Felix Serralles of Puerto Rico holds a slim margin over American Kyle Kaiser and British driver Dean Stoneman. Each of the three have won races this season, and could climb the standings with victories at the 2.4-mile Mid-Ohio course. Not too far back is Zach Veach, who has also found victory lane this year for Belardi Racing. 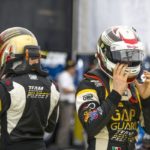 It can’t get any closer in the standings as Team Pelfrey teammates Pato O’Ward of Mexico and American Aaron Telitz are tied at 297 points with five races to go (both pictured right). The duo have dominated the season, with Telitz on a tear – winning four consecutive races in a bid to overtake O’Ward. While the two teammates will duel for the title, third-place in the standings is also deadlocked, as Mazda scholarship driver Nico Jamin of Cape Motorsports w/Wayne Taylor Racing is tied with Juncos Racing’s Will Owen. Following the two races at Mid-Ohio, the Pro Mazda teams will race three times in the Mazda Road to Indy Finale weekend at Mazda Raceway. 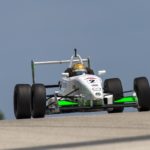 While not as close as the Pro Mazda battle, two teammates are also fighting for this year’s championship. Canadian Parker Thompson (pictured left), who won Race 2 in his home country at Toronto, holds the lead over his Australian teammate Anthony Martin. Both youngsters race for Cape Motorsports w/Wayne Taylor Racing. Brazilian Victor Franzoni earned an impressive win in Race 1 at Toronto, and holds a tight grip on third place in the standings for ArmsUp Motorsports.