Third and fourth-place finishes in Prototype class for Mazda team. (See the highlight video by clicking the picture below!)

IRVINE, Calif. (June 4, 2016) – It began as a weekend of struggles for the Mazda Prototype team at the Chevrolet Detroit Belle Isle Grand Prix, but the team showed perseverance to bring home finishes of third and fourth-place in the Prototype class in the 100-minute race. This is the first podium result for the Mazda team in the IMSA WeatherTech SportsCar Championship series. The No. 55 car driven by Tristan Nunez and Jonathan Bomarito was third, while the No. 70 Castrol/ModSpace Mazda piloted by Tom Long and Joel Miller was fourth. This marks the third-straight top-five Prototype class finish for the team and the fourth consecutive race where the team matched or topped their previous ‘best-ever’ finish. 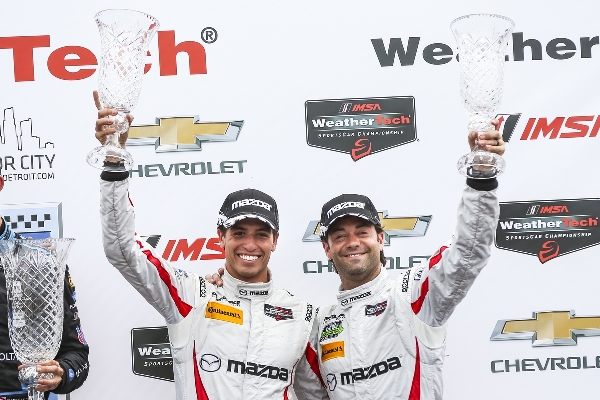 The weekend began with both cars struggling to match the speed of the Corvette Daytona Prototypes on the bumpy temporary street circuit. (The Mazda chassis was initially designed for European circuits, which are primarily very smooth. The aerodynamics of the car are rendered less effective on bumpy circuits.) The No. 70 car also went through an engine change Friday and a Saturday morning spin in the warm-up session, putting the crew to the test. Yet, once the race began, both Mazdas remained steadfast while their competitors crashed or met with mechanical troubles.

Driver Quotes
Tristan Nunez, Driver, No. 55 Mazda Prototype
What are your emotions about finishing third? “I think everyone’s a little in shock right now. That we would get our first podium here in Detroit of all places. That really does say something for Mazda saying ‘Never Stop Challenging.’ We didn’t have the pace initially in the weekend but the team got together and gave us a great race car. It was great in traffic and on a long stint on tires. We let everyone else make mistakes and ended up third. It’s a big confidence booster leading into the rest of the season.”

Jonathan Bomarito, Driver, No. 55 Mazda Prototype
What does the third-place finish mean to the team? “It’s a big step moving forward to get our first podium. We’re looking forward to five great races remaining in the season, but we’re enjoying the moment. The guys have worked their butts off for a long time to get to this point. We’re going to enjoy it, but as soon as we get back home, it’s all business.

How tough were the conditions for you?  “The Detroit track is just incredibly bumpy for our cars. It’s very physically demanding, not merely because of the G-forces but the forces going down your spine and through your neck. There are a lot of hard-hitting bumps that take a toll on you. You really have to be focused to get through those physical issues. But when you’re on the podium, you always feel a little better!”

Tom Long, Driver, No. 70 Mazda Prototype
Could you have predicted the result before the race? “It certainly was a crazy weekend and our Mazda Motorsports guys overcame a ton of adversity yesterday and today to give us those results. So proud of the guys for all of the hard work they put in. This place is very bumpy, very tricky and it’s hard on the cars. But our cars held-up great to outlast the competition. Certainly we wanted to be battling for the lead, but we just had to settle in, and get into our own rhythm.”

Joel Miller, Driver, No. 70 Mazda Prototype
Can you describe the fourth-place finish?  “This was the craziest fourth-place I’ve every had, honestly. Tom had a good start and we had an issue that brought us into the pits, and it happened again but we managed those. Today was all about managing what we had and we just needed to get across the finish line. We let our competition beat themselves and we just stuck to our game. We’re ready to put this one behind us and go on to Watkins Glen (the next race).”