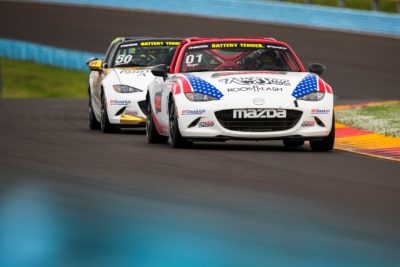 (Pictured left, Nikko Reger leads race 2 at WGI.) Nikko Reger (No. 01 Copeland Motorsports /Rockstar Wigs) used his Skip Barber MAZDASPEED Pro Challenge experience and patience to drive a clean race. With four lead changes in the final four laps, the race was nothing short of thrilling. Reger’s patience paid off. He scored the win after starting 10th and taking the lead on the last lap.

Reger’s teammate, Dean Copeland, finished fourth to increase his points lead in the championship and the pursuit of the $200,000 Mazda Road to 24 scholarship.

How did they do it? Nikko Reger began in 10th and didn’t take the lead until the last lap of the race when a similar penultimate lap incident from yesterday, this time between leaders Mark Drennan and Chris Stone, turned the battle for third into a battle for the win.

Thirty-four cars took to the Watkins Glen International circuit on a blustery and cold Sunday morning for round four of the series. Drake Kemper (No. 99 Royal Rugby/Sick Sideways Racing) began the race on pole by garnering the fastest lap from the very wet Saturday race (2.24.872). Multiple incidents took out almost a dozen cars and resulted in almost 30 minutes of full-course cautions before an intense final few laps.

Who were the hard chargers? Jamie Tucker (No. 97 Auto Technik Racing), making his series debut at Watkins Glen, took the Idemitsu Hard Charger $1,000 award with 19 positions gained, moving from a 24th place starting position to a fifth place finish.

Quotes:
Nikko Reger (Winner): “The win feels phenomenal. It’s been four races already and we struggled in the first three. We had a bad start yesterday so this is such a relief. Going into the race, I was looking to just keep it clean. After the start, which was terrifying, I wanted to play it clean the whole time and we did. At the end of the race, there wasn’t a single scratch on my car.”

Dean Copeland (Points Leader): “This was a race of survival. There were times it was three and four wide into the bus stop. All I could think about was points. After the last restart I was running ninth and I didn’t pass any cars and finished fourth. Patience was a virtue today. My teammate Nikko drove his heart out today. He just turned 18, so what a great birthday present to be on the top step of the podium. This was an awesome weekend for Copeland Motorsports.”

Who is leading the championship? After the first four races, Dean Copeland leads the MX-5 Cup standings, thanks to consistent finishes at both Mazda Raceway and Watkins Glen.

What’s next: Rounds five and six of the MX-5 Cup will be at Road America during the SCCA June Sprints on June 18-19.

About the MX-5 Cup
The MX-5 Cup is the signature spec series for the Mazda Road to 24 (#MRT24), the sports car counterpart to the Mazda Road to Indy (#MRTI). On both paths, Mazda-powered champions earn a Mazda scholarship to advance their career. The MX-5 Cup champion earns a $200,000 scholarship.
The 2016 season features the all-new fourth generation Mazda MX-5 Miata. For the first time, Mazda has commissioned complete turnkey race cars, with the goal that all cars are as close to identical as possible, ensuring the best drivers rise to the top. Over 60 of the $53,000 race cars have been delivered to date. Information on the car is online at www.mazdamotorsports.com.

About SCCA Pro Racing
SCCA Pro Racing Ltd. is a wholly owned subsidiary of Sports Car Club of America, Inc.—a 60,000-member organization dedicated to motorsports events. SCCA Pro Racing provides full-service organization, operation and sanction for numerous professional racing series, documented within this website. Each series holds events on high-profile race weekends and annually crowns Champions. Known for its operational expertise, SCCA Pro Racing has been the choice of privately owned racing series, as well as those promoted by automobile manufacturers, to conduct all facets of their Championships. 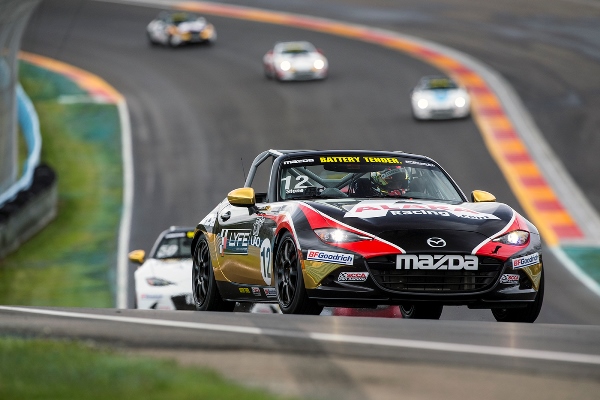