While development continues between Mazda Motorsports and Ron Bauer on the 2016 MX-5, what better way to track how things are going than to have a wrap-up following each National-level SCCA event the team attends?

This past weekend, Bauer joined 198 other competitors in Crows Landing, CA for the second SCCA Pro Solo of the season. This would be the first Pro Solo in STR trim for the MX-5 after finishing 2nd the previous weekend at the National Tour at the same site.

A Pro Solo consists of “mirrored” courses with a drag race start.  Just like a drag race, two drivers at a time stage against each other in front of a drag tree and try to get a perfect reaction time.  In the case of Pro Solo, a perfect reaction time is 0.500 second.  After the start, each driver takes to the course of cones and ultimately crosses the finish lights.  Drivers get two runs per side in each of three sessions – Saturday morning, Saturday afternoon, and then again Sunday morning.  The fast time from each side (left and right) gets added together to determine total time.

The Crows Landing site is an old auxiliary Naval air station where Navy fighter pilots were trained in the 1940s.  It is made up of multiple runways with beautiful, grippy concrete.

Last week’s article focused on the changes that were made to the car to take advantage of the bumpy, but very grippy site.  The team arrived early Friday, and was able to take advantage of the practice course that was provided.  While much of the course was the same as the previous week’s practice, there were a few changes.  The good news was that the MX-5 felt great using the settings from the previous weekend, and Bauer was able to run the fast STR time there.

Saturday morning provided sunny skies, but there was a constant 20-30 mph wind all day.  STR had a total of 16 competitors entered for the weekend.  Aside from Bauer in the 2016 MX-5, the rest of the competitors were either driving NC Miatas or Honda S2000s.  The winner of the Tour the weekend before was back, as were a number of the other competitors, with a few new names added.

As one of only three drivers running with a co-driver, Bauer was able to watch the majority of the class run before his opportunity came.  As with the weekend before, James Yom, in his S2000 CR, had the quick raw times, with both courses being right around 32 seconds each.  Due to cones on both of his left runs, however, he was sitting back in the pack.  Kevin Dietz, also in an S2000, had the lead prior to Bauer’s runs. 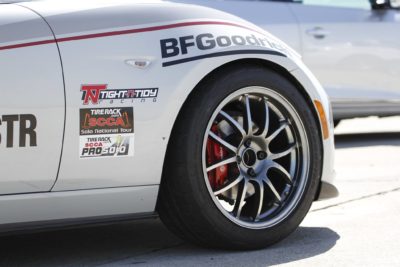 Saturday afternoon saw Yom cleaning up and going faster to take over the lead from Bauer, who also picked up time.  Bauer had a quicker run on the left, but slid sideways into a wall, taking out three cones.

At most Pro Solo’s, many consider Saturday’s runs practice for Sunday morning, as usually the times improve Sunday morning.  This event would be no different.  Yom and Bauer were now staged against each other for each run.  Yom’s first two runs saw no improvement, while Bauer took off 7/10s to take the lead for the second time of the weekend.  Unfortunately, a cone on Bauer’s next right side run, along with nearly hitting the same wall on the left course that he had hit previously, left the door open for the rest of the class.  By the time all was said and done, Bauer would fall to 4th for the weekend.

“Sunday morning was a very emotional see-saw for me.  From leading at the end of the first two runs, to coning away a run that would have left me in second, and then ultimately falling to fourth place; I went from being super excited, to, let’s just say, less than excited,” said Bauer.  “In the end, I really had to focus on the fact that this was just the second real event in STR trim, and both the car and I had some great moments.  We still have four months of testing and tuning before the National Championships, and I plan to be at a point where we are contesting for that National Champion’s jacket.  The parts we’re currently running on the car along with the fantastic BFG Rival S tires seem to be moving us in the right direction,” added Bauer.

The next few weeks will see the team running some local events before heading out to the Spring Nationals in Lincoln, NE over Memorial Day weekend.  This weekend will hold both a Pro Solo and a National Tour.  Check back to see how the development is coming along!