Will Rodgers’ perspective on the differences between club racing and going professional with Mazda.

For the past two seasons, I have competed within the Teen Mazda Challenge championship in conjunction with the National Auto Sport Association (NASA). In both a 1991 and 2001 Mazda Spec Miata, I have been racing some of the best and brightest up-and-coming sports car racers.  The series is all about developing young talent and directing it up the Mazda Road to 24 (#MRT24) ladder. The series offers drivers who win the championship an opportunity to be invited to the MRT24 Shootout to earn a $100,000 scholarship package to race in the Idemitsu Mazda MX-5 Cup presented by BFGoodrich® Tires.

For 2016, I have made the transition to the professional series of Pirelli World Challenge (PWC), continuing my climb up the Mazda Motorsports ladder in a Mazda2 in the Touring Car B class, aka “TCB,” aka “B-Spec.” The class is full of talent and provides great global TV exposure.

Making the transition to the pro ranks for some may be a daunting task. There is a lot more responsibility, financially and socially, along with the added pressure of being seen and representing sponsors in a pro series, which is broadcast live worldwide.

Financially, compared to club racing, there are a few more obstacles. The entry fees can be very expensive; you must rent or own series-specific equipment and pay a well-operated team to host you over the weekend. Don’t let this scare you away from the idea of going pro, though. The total budget for a TCB season is about the equivalent to running a top-of-the line Spec Miata program competing in Teen Mazda Challenge.

Socially, there are more responsibilities such as TV, fans and press, both live and online. The recognition you get is actually pretty remarkable. People actually want to hear about you and your racing. Being a friendly face and responsible brand ambassador for your partners and Mazda is key. Taking every opportunity to talk with a fan, do an interview or re-post something on Facebook only betters your personal brand.

Something I learned the hard way in my first weekend competing within a pro series is that officials take their jobs very seriously and don’t mess around with the rule book. There are no: “Oh, don’t forget to take care of that for next race” second chances. I had my first potential PWC win disqualified as a result of a tech error, which may have been overlooked in amateur racing.

So far, moving into the pro ranks has been a great step toward my goals as both a driver and businessman within the motorsport industry. The value generated in the first round of PWC alone has been worth the effort. Coming from a self-funded program, I was grateful to receive over seven minutes of national television coverage along with thousands of views through social media and motorsport publications. I am still actively looking for sponsorship to complete this season of racing. I have now established market value to present to potential partners, and I am sure that the right partner and I will be able to capitalize through collaboration.

I am looking forward to the remainder of the season and can’t wait to see where Pirelli World Challenge takes me in my career. (Will Rodgers’ PWC machine below.) 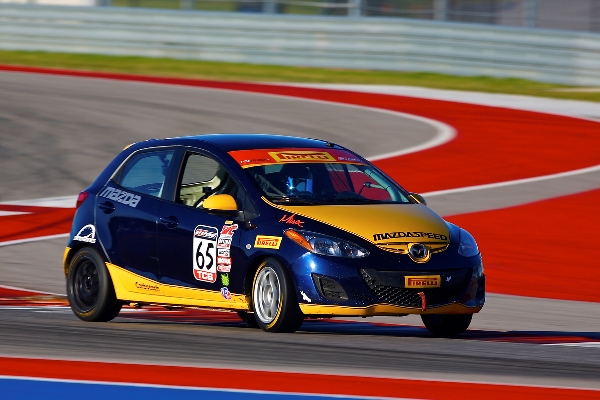